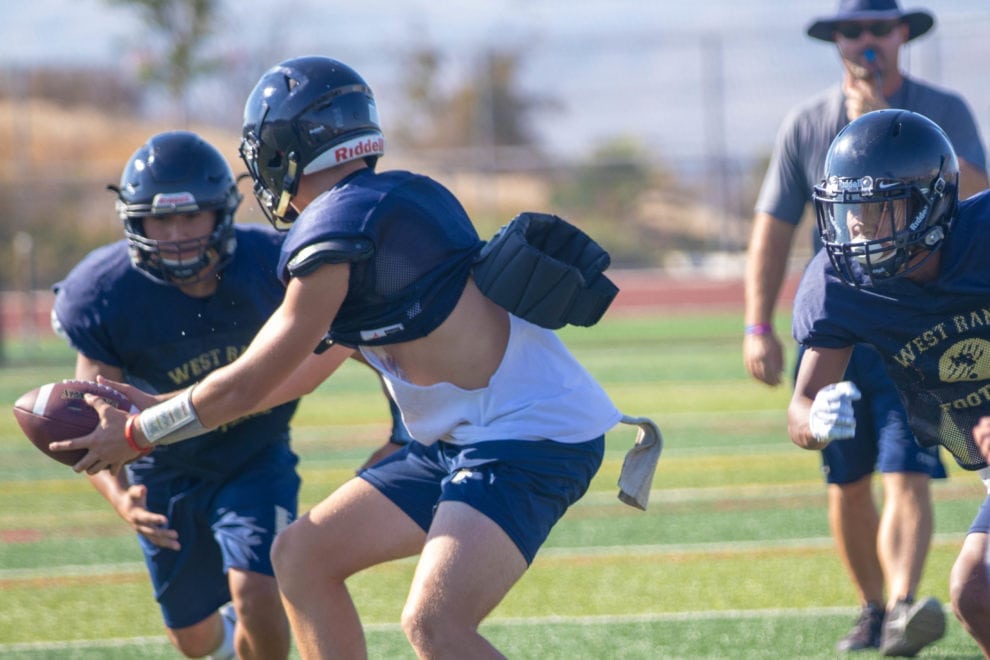 As published on TheSignal by Diego Marquez

Sitting in the driver’s seat of a black Mini Cooper, West Ranch quarterback Weston Eget sat talking to a teammate as they were the last two players to leave practice on Monday.

Just like he had sat at the wheel of his car, Eget now has the keys to the West Ranch offense as he will be the day one starter at quarterback for head coach Chris Varner and a potent Wildcat offense.

“Weston always had the potential, he was just a little undersized last season. I think he would be the first to admit that,” Varner said.

Sprouting about four or five inches to a healthy 6-foot-3, 185-pound frame, Eget looks the part of an elite quarterback.

“Through hard work and dedication in the weight room he’s up to almost 200 pounds and is as strong as anyone else in there,” Varner said. “I’m seeing him build a whole lot of confidence off that.

“It’s just been very cyclical for him, that once things started moving he started to get interest from schools and it’s just gotten better and better. He’s the first guy here and the last one to leave, it’s all hard work.”

With the growth spurt and the intangibles, Eget is aware of the hype surrounding him. Schools like Arizona State, Oregon State, UCLA, San Diego State, Oklahoma State, Berkeley, Fresno State, Utah State, Northern Colorado, Eastern Washington and UNLV are showing interest and he already holds offers from San Jose State and Sacramento State. Eget said that he tries not to buy into all the noise and is just trying to improve.

Eget is one of the tallest, if not the tallest player, out on the field at practices, rocketing passes at Wildcat wide receivers Jovan Camacho and newcomer, Hart transfer Jackson Reyes.

“He’s looking good and I’m excited to catch balls from him,” Reyes said. “He can definitely see the field pretty good.”

“I didn’t see him before he had his growth spurt,” he added jokingly.

Last season Eget was slated as West Ranch’s backup quarterback behind Colton Mitchell, who started in four games for the Wildcats before going down with an injury against Oak Park.

Eget stepped in for Mitchell and threw for 284 yards and five touchdowns on 17-for-29 pass attempts to lead the Wildcats to a 48-21 victory and their fourth win of the season.

Finishing the 2017-18 season with 990 passing yards, eight touchdowns and six interceptions, Eget knew he had a lot to work on if he wanted to live up to his potential.

With returning starters like Jovan and running back Ryan Camacho, Eget’s chemistry and familiarity with the offense and his teammates can only improve as he will have almost a calendar year under his belt when the season starts.

“It’s going well,” Eget said. “I’m working every single day with these guys … I’ve known the Camachos since day one so we definitely have that chemistry. Still working with Jackson every week and there’s no doubt that we will get the chemistry down pretty easily.”

Still looking to improve his stock and finish out his Wildcat football career out strong, Eget understands that he will have to step up every day. Not just on game days, but in practice, in the weight room and in the classroom to not only be a leader, but an example for a young 2018-19 West Ranch football team.

“I can’t wait for the first game. The feeling of getting back out there with everyone watching, Friday nights and stuff. Being to be able to feel that feeling again, I miss it a little bit.”