Posted on May 24, 2018 in Bryce Young, High School Quarterbacks. 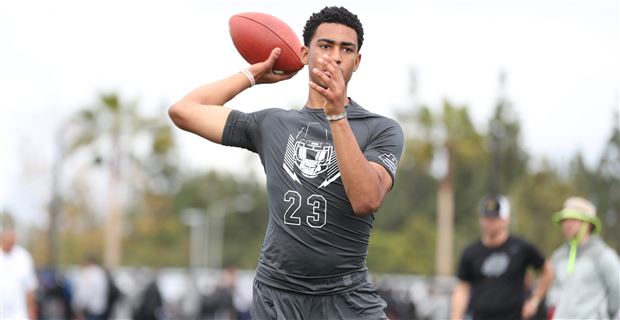 As published on 247Sports by Greg Biggins

Bryce Young is an electric playmaker and one of the top signal callers in the 2020 class.

Young is rated the No. 40 player nationally by 247Sports and the No. 1 dual-threat quarterback in the country. He’s a dynamic athlete who can beat a defense with his arm or his legs, is extremely intelligent, a natural leader and poised beyond his years.

Young is planning a summer commitment and has been very active on the travel circuit. He has taken several unofficial visits and over the last two years and recently visited Oklahoma for the third time and Texas for the second time.

“The trip to Oklahoma was really good,” Young said. “It was my third trip there but the first time for my dad and it was good for him to go out there and see it. My dad and I really close and wherever I go, I want him to be comfortable with it and he really liked it out there.

“I spent a lot of time with coach (Lincoln) Riley and I really like him a lot. For him to spend basically the whole day with me was big. He’s a very hands on coach and it was good to sit down with him and get to know his coaching style better.

“We got a tour of the campus which was more for my dad then me. He got the celebrity treatment and I just kind of hung in the back and enjoyed the environment.”

“That was kind of a last minute trip for me but I really enjoyed it,” Young said. “The first time I visited, I didn’t get to spend much time with coach Herman because he had a family commitment but he and coach beck blocked out a ton of time for me and I like both guys a lot.

“It was good to hear coach Herman’s coaching philosophy, his story and learn about his background. Coach Beck talked to me about his coaching style and we watched my film together and that was cool.

Young said he doesn’t have any other visits planned but will likely make another visit to USC in the near future.

“I’ve been to USC a number of times but I’m sure I’ll be back there again soon,” Young said. “It’s so close to home and I wouldn’t be doing my due diligence if I didn’t take advantage of the opportunity to go and meet up with the coaches.

“The next step for me is to narrow things down and I’m starting to get comfortable with my options. I think I have a good idea of what I want to do and I’m just going to start focusing on the schools I like and go from there. I’m hoping to make a commitment sometime in July or early August and I feel good about that timeframe right now.”