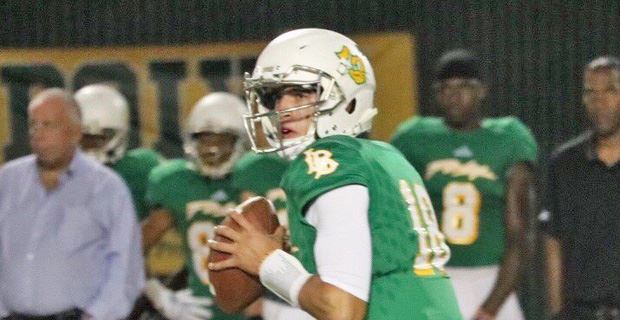 As written by Greg Biggins and published on 247Sports

Long Beach Poly (Calif.) freshman quarterback Jake Garcia has a chance to develop into a national recruit over the coming years.

Although just a freshman, Jake Garcia has already established himself as a prospect to watch closely over the coming years.

The talented signal caller has all the tools to project as a national recruit in a few years. He has a long, lanky frame with plenty of room to add size and strength. He’s solid mechanically with a smooth release and the arm strength to get the ball down the field.

Garcia shows an advanced feel in the pocket, looks as comfortable under center as he does in the shotgun and has a poise and calmness to his game. He has played in a backup roll to Florida commit Matt Corral this season but will be running the show next season and should put up big numbers in the Poly offense.

On the recruiting front, Garcia landed his first scholarship offer from San Jose State a few weeks ago an is hearing from a handful of other schools as well.

“I was pretty speechless when I got the offer from San Jose State,” Garcia said. “It was a great feeling, it’s always good to get that first offer and great to see that your game is progressing. I have a good relationship with coach Gundy (Ryan Gunderson, QB coach) and we have actually been talking for a while now.

“I saw them at a few satellite camps I attended this past off-season and I really like the staff a lot. Gundy is a really cool guy and I was thankful for the offer.”

As for who else is showing interest;

“My QB coach Danny Hernandez told me TCU, Indiana and Texas Tech are all interested,” Garcia said. “I talked with coach Cumbie (TCU QB coach) at a camp out here and really like him lot, he’s a great guy.

“Right now, I’m open to everyone and don’t have any summer camp plans yet. I want to wait it out, see who’s interested and then visit. Growing up since my dad played at Nebraska, that was the game we always had on but he’s not going to push me anywhere and is open to me playing for wherever the best fit is.

“I never really had a favorite team, I had favorite players. I loved Johnny Manziel, I could tell you every play he made against every team and what the score was. Right now, Aaron Rodgers is the guy I’m striving to play like. He’s a pocket passer who gives the threat to run and can make every throw on the field.”