Aaron Thomas, Valencia High quarterback, is the All-SCV Player of the Year 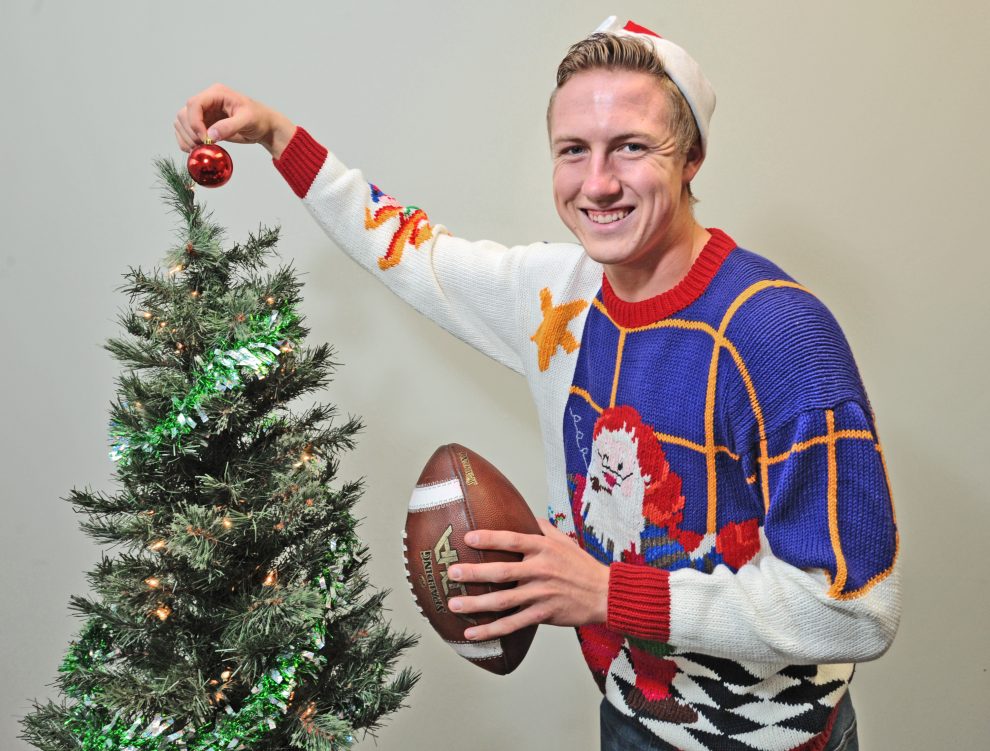 As published on The Signal by Mason Nesbitt

Valencia coach Larry Muir had to pause a recent phone conversation about senior quarterback Aaron Thomas. Someone was at the door.

As it turns out, it was Thomas, delivering homemade cookies and a card.

The 6-foot-3 gunslinger, though, delivered more than holiday sweets in 2016.

He backed up the hype that ensued after he replaced injured starter Cole Parkinson during the 2015 CIF playoffs and nearly led Valencia to a quarterfinal win over Chino Hills.

Thomas threw for 347 yards that night in a 16-14 loss. He then passed for 3,136 yards, 29 touchdowns and nine interceptions this year as a senior, leading Valencia to an eighth straight Foothill League title and the CIF-Southern Section Division 2 semifinals.

“He was making plays and doing very subtle things that I thought were terrific,” Muir says of Thomas. “Moving around the pocket, making sure we were in the right play, going through his reads.”

In other words: everything, and more, that a coach expects from a senior signal caller.
For Thomas, it was the culmination of years of preparation.

He first played quarterback in sixth grade. Each year he developed. Each year he grew in stature and knowledge. By the time he was a junior, Muir felt Thomas could step into the starting role at a moment’s notice.

Then Parkinson broke his leg, and Thomas picked apart the Chino Hills defense.

“A lot of people over the offseason told me they were so excited to see me play because they saw me in the Chino Hills game,” Thomas says.
The solution to dealing with the pressure?

“When you have those kinds of expectations, you can’t really focus on them only because those are going to distract you from the goal you want to achieve,” says Thomas, who rushed for 222 yards and six touchdowns this year. “So I was just focusing on every single week, the next game, going 1-0 and preparing every week — not paying attention to the people and drama outside of football until football was over.”

Before this season, Muir called Thomas the best unknown quarterback in Southern California.

That may still be the case (Thomas has received interest primarily from NCAA Division 3 schools), but not because Thomas didn’t have a prolific season.

He improved as the year progressed.

Thomas threw for 386 yards, three touchdowns and no interceptions in a 48-9 win over Bakersfield on Sept. 23. He threw four touchdowns in a win over Golden Valley on Oct. 14. And then he passed for seven touchdowns against one interception in Valencia’s first two CIF playoff games, victories over Notre Dame of Sherman Oaks and Arroyo Grande.

He registered 285 yards and four passing touchdowns against San Clemente in the D2 semifinals. But a late interception in the end zone ended a crucial Valencia drive in the 41-35 loss.

“It’s not that we lost (that bothers me most). It’s just that we had it, that we thought we had it,” Thomas says.

That may be true. But Thomas’ season was hardly characterized by missed opportunities.