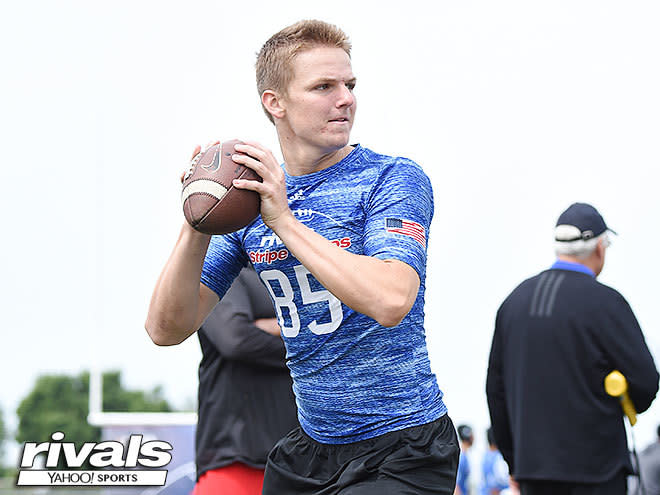 By Adam Gorney as published on Rivals.com

THE LATEST: Washington State is the newest offer for 2019 three-star quarterback Ryan Hilinski
.

That is a big one but it’s especially important since Hilinski’s brother, Tyler, already plays for the Cougars and the 2019 standout is already quite familiar with the Washington State program.

Last week, Hilinski received word from Washington State assistant coach Dave Nichol that the Cougars wanted to get involved and there’s no question about serious interest on both sides.

IN HIS WORDS: “Wazzu offer is huge. Coach Nichol, my area recruiting coordinator and wide receivers coach up there, made the call on Tuesday. He expressed his interest in me and how all the other coaches loved watching my film and think I have crazy potential. It was huge. Since Tyler is up there it could be very interesting to see down the road. I could learn a lot from him, especially since it’s college ball when the time comes.”

RIVALS’ REACTION: Many more top programs could get interested in Hilinski since he’s having a phenomenal start to his junior season.

Through five games, Hilinski is completing 75 percent of his passes for 1,752 yards with 16 touchdowns and one interception. He’s averaging more than 350 passing yards per outing.

Alabama, Auburn and Northwestern have reached out recently and more offers could come soon because Hilinski just released his midseason highlight tape.

There is no question that Hilinski is highly interested in Washington State, he’s said excellent things about the program and having his brother in Pullman is a big deal.

But it’s also still too early for the 2019 quarterback to jump on any offer and since he’s just getting seriously started with the recruiting process, it could be some time until he makes a decision.