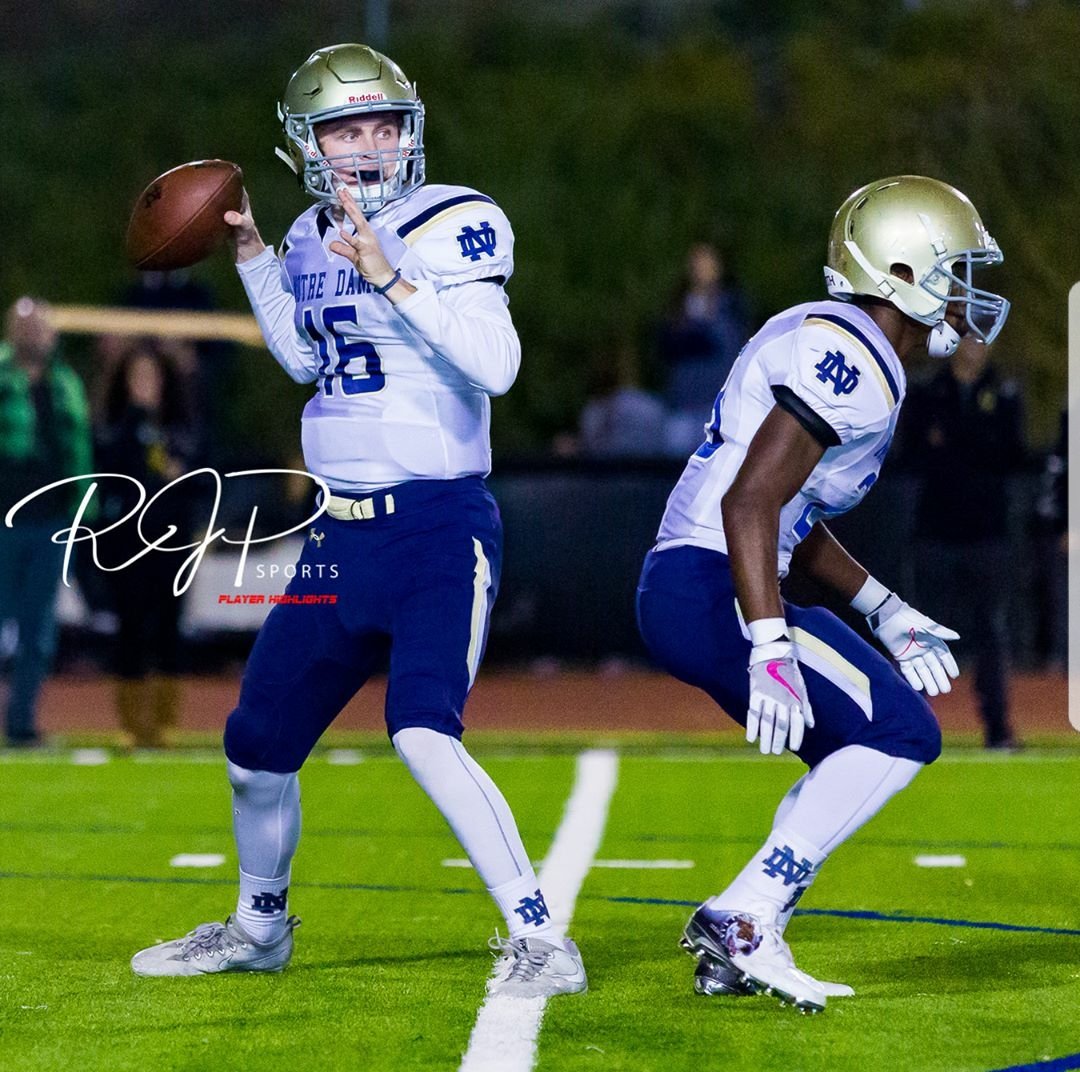 As published on Daily News written by Tony Ciniglio | david.crane@dailynews.com |

Then Meek delivered a strong performance throughout the week at practice and carried it into an imposing 55-7 nonleague victory over Paraclete at Littlerock High School.

“I didn’t want to let up. I didn’t want to assume anything,” Meek said. “We had battled so hard at practice. It was about who had the hot hand, and I was fortunate that I had it right now.

“He pushed me to be better, and I pushed him. We were just playing as hard as we could.”

Meek came out firing against Paraclete, going a perfect 9 for 9 for 126 yards and a 67-yard touchdown pass to W.M. Johnson while also rushing for 69 yards and three more touchdowns on five carries for Notre Dame (1-2).

“Toby and I compete very well, and we make each other better,” Meek said. “That was the goal. Both of us are good quarterbacks.

“We’ve been running a lot in the last two weeks, so we wanted to open it up a bit. They are going to stack against the run for us, so we wanted to keep them accountable, and the receivers and the line showed up.”

Meek and Baklayen alternated series in the first two games, but Notre Dame had trouble mounting an attack in the passing game with losses to Mountain View St. Francis and Moorpark.

Rooney thought it was important to provide some consistency.

“We decided Cooper was going to be our one guy, and obviously he did a great job tonight,” Rooney said. “They were competing all summer and playing every other series, and both were having a hard time feeling comfortable because neither was in there very long.

“I felt Cooper had been a little more successful throwing the ball overall. But we certainly didn’t expect to score that many points or down them down like that. They are actually a very good team.”

It was a disaster from the outset for Paraclete (1-3).

Notre Dame led 28-0 after one quarter and 42-0 at halftime. The fourth quarter was played with a running clock.

“I’m in a state of shock honestly,” Paraclete coach Dean Herrington said.After missing a field goal on its opening drive, Paraclete was besieged by five turnovers, offensive inconsistency and a lack of presence on defense.

Paraclete broke up the shutout when quarterback Marshall Saul threw a 56-yard touchdown pass to Nicholas Wyatt late in the fourth quarter, but Paraclete had three interceptions, a fumble and a botched punt return.

“Never in my wildest dreams did I think they would score 55 points on us,” Herrington said. “We were not real tough, we did not tackle well, we were not smart and we did not make good reads. We had dropped passes, missed marks and blown assignments.

On the second play from scrimmage, Meek scrambled for a 45-yard scoring run for a 7-0 leadMeek then connected with W.M. Johnson for a 67-yard touchdown strike that seemed to open up the offense and open a 14-0 lead.

“I got stopped by two linebackers, but I knew I had to go through them, and that’s what I did,” Johnson said.

Mckel Broussard added scoring runs of 17 and 5 yards in the first quarter for a 28-0 lead. Anthony Spearman added a 16-yard scoring run, and Meek capped off the imposing first half with a 17-yard scoring scamper.

Christian Grubb had 69 yards on seven carries, and Spearman had 50 yards on eight carries in a big bounceback from an 0-2 start.

“We went from a team in the last two weeks that did not know where it was going to today where we dominated,” Broussard said. “I’m proud of us for coming out and dominating.”

Justin Horton, Sean Guyton and Maxwell Cotton each came up with interceptions for Notre Dame, and Cotton returned his 60 yards for a touchdown to cap the onslaught, weaving in and out of Paraclete players.

“It was a team effort – the d-line got in there and put the quarterback under pressure and I was in the right place,” Cotton said. “Everyone had great blocks. It was just about making a play and breaking tackles.”