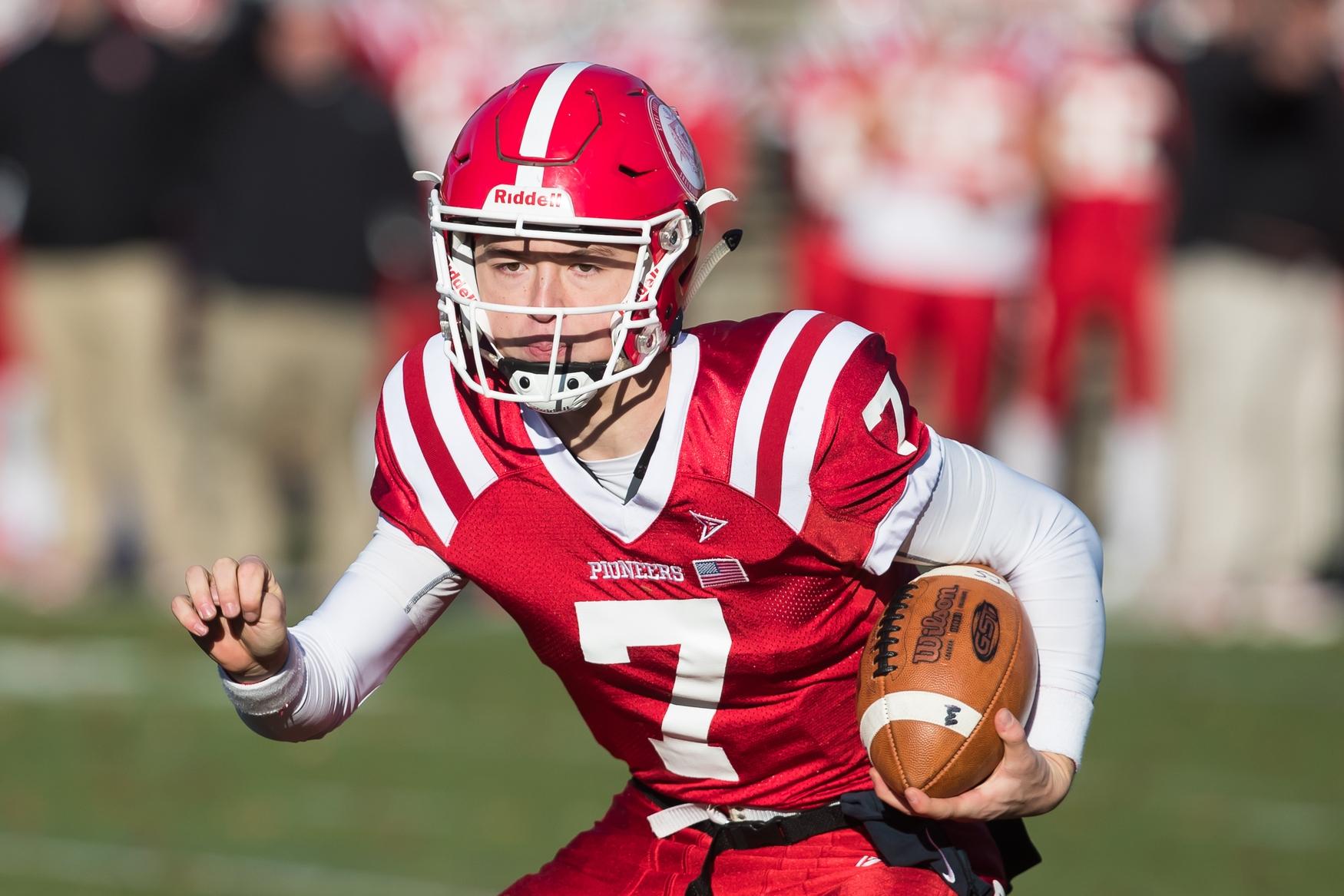 As published in Telegram.com written by Tom Flanagan,

Going back to early September, it may have been hard to fathom the idea of St. John’s High seeing Springfield Central on the football field again this season.

While Central proved that weekend that the idea of another team from Western Mass. knocking it off was far-fetched, the Pioneers licked their wounds, fixed some things and last weekend completed the turnaround by beating Shrewsbury High to win the Central Mass. title.

In the process, St. John’s earned another crack at Western Mass. champ Central, whom they will meet at 2 p.m. Saturday at Westfield State for the right to play in the Division 3 state championship game and defend its title at Gillette Stadium.

The Pioneers, of course, defeated the Golden Eagles in a state semifinal last year on their way to a state championship.

The Pioneers will have their hands full this time around against a team that has simply dismantled its competition on its way to a 9-1 record, but Central knows St. John’s is a different team now than it was on Sept. 14.

“Some improvements I’ve noticed is (the Pioneers) have got better and more seasoned in all three phases of the game — defense, offense and special teams,” Central coach Val Brower said. “The regular-season win won’t have any effect, both teams have changed, and competing in September is different than playing in November.”

The Golden Eagles opened the season with a loss to Lincoln-Sudbury, but have been unstoppable in winning nine straight.

“Central has excellent athletes, tremendous team speed and size up front,” St. John’s coach John Andreoli said. “We need to stop the big play on defense and capitalize on our offensive possessions in the red zone.”

Central beat Westfield, 22-0, in the Western Mass. title game, and that was a close game for the Golden Eagles, comparatively speaking.

In regular-season action, Central’s path of destruction included a pair of 55-0 victories and a 71-7 win.

Central has capable backfield stars in Isaac Boston and Mahari Miller. Boston tossed five touchdown passes in the regular-season win over the Pioneers.

The Golden Eagles also can score in bunches on the ground, thanks to Kwame Kyles, who has rushed for more than 900 yards and has 17 touchdowns. Kyles had two touchdowns in the Western Mass. championship game.

The Pioneers (7-3) probably would not shy away from a track meet with the Golden Eagles, as the Pioneers’ offense has consistently been, perhaps, the best in Central Mass. all year, led by junior quarterback Colin Schofield.

St. John’s is averaging 37 points per game, and the already potent offense has returned junior Eamonn Dennis, a playmaker with speed to burn and ample interest from Division 1 colleges.

“We have a Division I–caliber impact player at full strength on offense, defense and special teams,” Andreoli said of Dennis, who lived up to his potential for big plays last week when he rushed for three touchdowns. “And Richarno Hylton has maximized his increased minutes (during Dennis’ absence) to improve significantly and develop into an outstanding running back for us.”

Brower isn’t heading into the game with the expectation his defense can completely halt the Pioneers’ blur offense.

″ ‘Stop’ isn’t the word I would use,” he said. “I would use ‘compete,’ compete on every play. St. John’s has a great program, team, alumni and coaching staff. They do a great job. You have to compete every play, and when they make a big play, move on and get ready to compete again.”

The Pioneers’ defense has improved since September, which should help to minimize chunk plays from the Golden Eagles.

“We’ve improved on our third- and fourth-down defense, and gotten off the field for our offense to capitalize on the stops, with resultant scores — we call them ‘stop and scores,’ ” Andreoli said. “Credit goes to our senior defensive leaders, Dom Imparato and Joe Katinas, for bringing along the young guys.”