Eget brothers making a name for themselves at the quarterback position 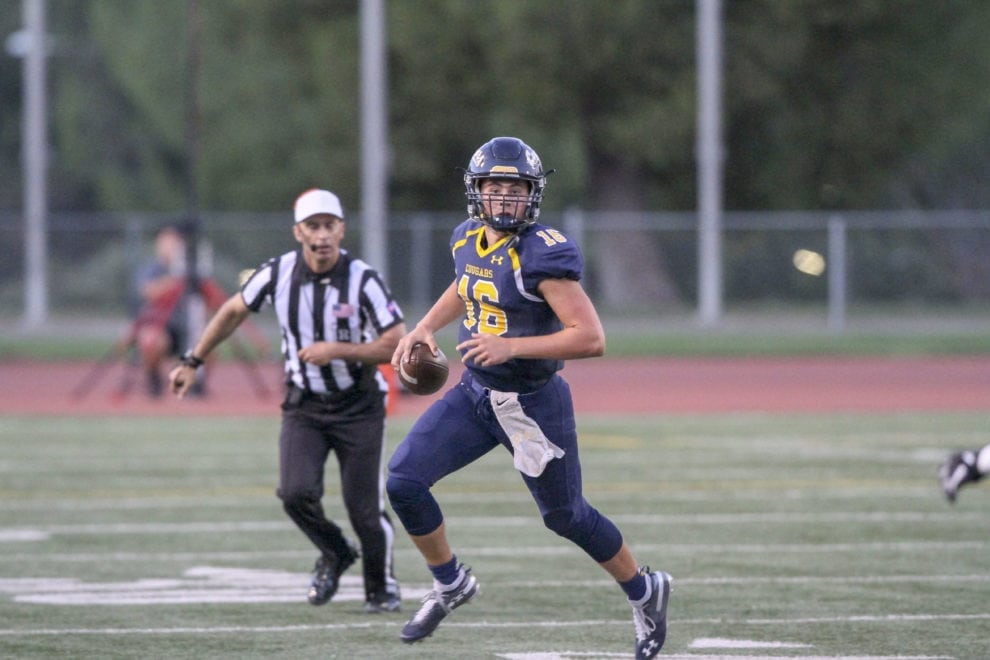 As published on SignalSCV.com written by Dan Lovi

The Eget family and sports go hand-in-hand, as evidenced by the success of quarterbacks Wyatt, Weston and Walker Eget.

It all started with their parents Barrie and Lynn Eget, who grew up playing sports themselves. Barrie played high school basketball at Crescenta Valley and received a scholarship to Cal State Northridge, then continued to play at College of the Canyons. Lynn played volleyball at Ontario Christian and received a scholarship to The Master’s University.

“We’re definitely a sports family, a huge football family,” Wyatt said. “As early as I can remember we grew up playing baseball, football and basketball. We were super heavy into sports.”

While the Eget brothers excelled at all sports, football took hold of them in high school and all three brothers decided to make it their main focus.

“We were all pretty good at baseball, but football, we’re all more passionate about it,” Wyatt said.

“There’s something about playing in front of your entire school on Friday nights,” Weston said. “Being under the lights, there is no comparison to my experiences in baseball.”

Wyatt and Weston used the skills they learned playing baseball and basketball to their advantage on the football field. While both have good size (Wyatt is six feet tall and Weston is 6-foot-2) and powerful arm strength, they also have the ability to use their feet when necessary. That quickness was learned on the basketball court.

Wyatt calls it “deceptive elusiveness” because at first glance it may not look like he can use his feet to extend plays, but his ability to escape potential sacks and keep a play going has already been on display in his first career start at Canyons this past Saturday.

“I think when you look at me you don’t really consider me a guy who can get out of the pocket and run, and that surprised a lot of people when they see me make a guy miss,” Wyatt said. “I’m definitely a pass first, run second type of guy. But being able to make a guy miss here and there, that’s crucial to my game.”

While Weston can also escape the pocket if necessary, his main strength comes from his powerful arm and pre-snap reads.

Weston already has 1,300 passing yards and 13 touchdowns in six games, having thrown only one interception.

“I feel like I can throw the ball with anyone in the country,” Weston said. “I’m pretty accurate and I’m able to get outside of the pocket and make some throws and smart decisions. Put the ball in my teammates’ hands and let them do what they do.”

Both Wyatt and Weston are surrounded by a bevy of skilled players. Weston has the Camacho brothers, Jovan and Ryan, who have combined for 1,661 all-purpose yards and 31 touchdowns in six games. He also has an explosive receiver in Jackson Reyes, who has eight touchdowns on the season.

COC is loaded with talent on both sides of the ball. Wyatt has standout receivers Jarrin Pierce, Brandon Pierce, Damaris August and Leroy Deshazor to throw to.

The Cougars’ defense is currently ranked as the No. 1 defense in the California Community College Athletic Association (CCCAA), allowing a mere 7.8 points per game.

“I have a very special team,” Wyatt said. “We have a great defense, my offensive line is great, so if I just do what I have to do and get the ball to my receivers they’ll make plays and make me look good. They help me out a lot and I’m blessed.”

While Wyatt will try to lead COC to an undefeated season and a playoff berth, Weston is already helping change the record books at West Ranch.

At 6-0, the Wildcats are off to their best start in school history.

“I think this team is special,” Weston said. “Looking through our team’s history, we have as many wins as the best team in West Ranch history so we’re just going to try and keep that going.”

“I cannot be happier for them,” Wyatt said. “They’ve all been working their butts off. For years upon years West Ranch had been the laughing stock of the league. All those kids there right now, they’re pissed because they want to make a change.”

“He’s such a great kid and positive leader and positive role model for the rest of the team,” West Ranch head coach Chris Varner said of Weston. “It’s a pleasure coaching him. They’re all great kids. All three are the same, all affable kids.”

While Varner is currently coaching Weston and has already spent time with Wyatt, if things go according to plan he’ll soon be coaching another Eget at quarterback, Walker.

Wyatt believes the youngest of the Eget brothers is way ahead of both him and Weston when they were his age.

“Walker, his instincts on the field are better than both me and Weston’s,” Wyatt said. “He’s a slow dude but I think once he grows into his body and he gets his speed he’s going to go off. Walker is head and shoulders above me and Weston ever were at sophomore year.”

Weston would love to have his brother succeed him at the position when he moves on to college next year.

“To pass something on to him like that, it’s pretty important to me,” Weston said. “Having two older brothers constantly on him to get better helps him out.”

Weston has already fielded offers from San Jose State and Sacramento State, but with Foothill League in action he’s likely to see more down the road.

While Wyatt will look to impress scouts as he takes over the reigns at COC and move on to the next level, he is sure about one thing — both of his younger brothers will be playing Division 1 football.

“There’s no doubt in my mind that he’s going to be Division 1 caliber,” Wyatt said of Walker. “Likewise Weston.”