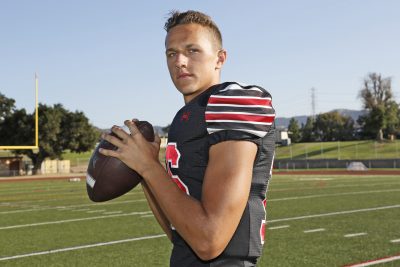 By Evan Barnes | ebarnes@scng.com | as published on Daily News

JT Shrout easily could have transferred from Hart last year and few would blame him.

Instead of playing quarterback his junior year, a crucial time to be seen by colleges, he sat behind Nick Moore. He only appeared in games when the score wasn’t in doubt.

But Shrout took it in stride. As someone well versed in Hart history, he knew patience would be rewarded.

“It was tough but you have to be a team guy and that’s what I tried to do,” Shrout said. “We had a good guy in front of me and if anything happened, I was ready.”

Now a senior, the wait has paid off with Shrout not only starting for Hart in Friday’s season opener against Downey at College of the Canyons, but also committed to Cal despite only having thrown 36 passes in his prep career.

“It taught me a lot of patience because when you go to college, you’re going to have to fight for a job with five guys that are just as good as you,” Shrout said.

VIDEO: Listen to JT Shrout in his own words describe his journey

At a time when transferring has become normal for various reasons — the CIF Southern Section saw 6,999 kids switch schools in the 2016-17 school year — Shrout’s decision could be seen as admirable. Or just business as usual at Hart.

In 1998, Kyle Boller’s lone season as Hart’s quarterback ended with a CIF-SS title and a four-year career at Cal. Three years later, it was Matt Moore who went from an All-CIF defensive back to an All-CIF quarterback and CIF-SS champion before playing at UCLA and Oregon State. Both eventually made the NFL.

Even last year, Shrout watched Moore’s brother Nick have a strong senior year that landed him at Eastern Washington after an ACL injury cost him part of his junior year.

Yet switching schools was never an option. Both of Shrout’s parents went to Hart and his father Jim was a wide receiver under head coach Mike Herrington.

“I have a history at Hart and there’s no doubt I wanted to stay here,” Shrout said.

Shrout even saw time at wide receiver last year, catching six passes while also seeing time in five games as Moore’s backup. But in the spring, the work began paying off as he saw offers start to roll in.

By June, he was ready to decide to commit to Cal. In July, he impressed observers at The Quarterback Collective, a gathering of some of the top high school quarterbacks in the country.

Not bad for a kid that whose lone varsity start came his sophomore year against Valencia and the most passes he’s thrown in a game (24) came that same year in a 24-0 loss to Saugus where he threw two interceptions.

Herrington also praised his quarterback for staying with the program and being prepared when it would have been easy to pout or leave.

“A lot of kids want instant gratification and he waited for his turn. It’s paid off with a scholarship and hopefully it’ll pay off with great stats and wins,” Herrington said.

Shrout’s strong arm, sound mechanics and precision have him ready to perform on the field but his mind and maturity made the journey even sweeter. It was the same poise he carried against Valencia in 2015 knowing the Foothill League title was at stake.

He left that game with a first quarter injury so come Friday, he’ll look to finish what he started. All while carrying on Hart tradition that says wait now, work hard, see the pay off later.

“There’s no pressure or nervousness for me,” Shrout said, I’ve waited two years for this and I’m ready to go.”