How one ‘ridiculous’ tactic took over college football recruiting 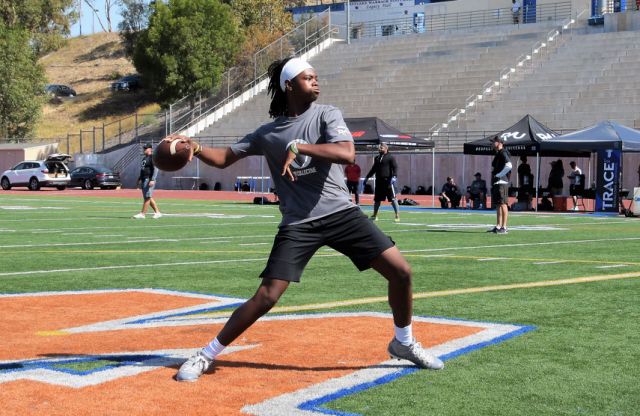 As published on YAHOO by Pete Thamel

THOUSAND OAKS, Calif. – Nearly a month ago at a football camp in Southern California, Colorado State’s coaching staff became intrigued by a quarterback known as “Baby Cam.” The Rams coaches hovered around Maalik Murphy, a 6-foot-4 embryotic version of Cam Newton, and taught him the nuances of dropbacks, footwork and route trees.

At the end of the camp, Murphy got introduced to head coach Mike Bobo, who offered him his first college scholarship. “I was super happy,” Murphy said this week at the QB Collective camp, a collection of top talent tutored by NFL coaches. “I couldn’t stop smiling.”

Murphy flashed his halogen grin as he retold the story, fittingly revealing a mouth full of braces. At 14, Murphy has yet to spend a day in high school, can’t drive a car and may not even start for the varsity team this season at Junípero Serra High School in Gardena, California.

But Murphy is plenty old enough to be offered a college football scholarship, which is emblematic of a vexing new trend that’s overtaking college football recruiting. The confluence of an earlier signing period, the proliferation of specialized camps and the pressures of social media have precipitously sped up the recruiting cycle.

How much faster is it? Less than a decade ago, former USC coach Lane Kiffin took a commitment from a seventh-grade quarterback named David Sills. The news shook the sporting establishment with apocalyptical finger wagging. ESPN commentator Bob Ryan called it “a classic example of bad parenting,” a New York Daily News column called it “ridiculous” and it offered a referendum on the state of recruiting.

These days, the trend of offering college scholarships to prospects early in high school and still in junior high is trending toward normal. This is particularly true of quarterbacks, the trickiest position to fill in the football recruiting vortex.

D.J. Uiagalelei, Rivals.com’s No. 1 overall prospect for the 2020 class, showed Yahoo Sports that his first offer came from Indiana while in sixth grade. (A Facebook message to his dad, David Uiagalelei, from IU’s director of player personnel said: “Has anybody offered him a scholarship – I would like to be his first if possible.”)

The quarterback regarded as the top Class of 2021 prospect, Caleb Williams, hit his goal of getting 15 offers by the end of his freshman season. Murphy, who projects as a top prospect in 2022, summed up the state of offers to young players: “That was a goal, to get an offer during eighth grade. All my friends did it, so I was like, ‘I’ve got to get me one.’ ”

The accelerated offering cycle has become a divisive topic in college football. Coaches find themselves in the uncomfortable position of issuing scholarship offers to players who are undeveloped, unfamiliar and potentially underwhelming. For players, seeing their peers blast their offers out on social media creates pressure to secure offers of their own.

The only thing worse than offering players early, coaches reluctantly admit, would be not doing it and missing out on them. “I hate it, it makes zero sense to me,” said a Power Five head coach, talking specifically about quarterbacks. “But at the same time, you have to do business the way business is done. If we wait too long, they all get committed up, and it’s really hard to recruit them. It’s scary, really.”
How early offers can be so enticing

One of Caleb Williams’ favorite moments during a recent trip to Alabama came when he sat down in head coach Nick Saban’s office for a 45-minute visit. Saban pushed a button, closing the door behind Williams and his family. “That was probably one of the coolest moments,” Williams recalled with a laugh. “It just closed real smoothly.”

Another door soon opened. Saban offered a scholarship, and Williams became the rare quarterback offered by the Tide as a high school freshman. (Uiagalelei also got offered by the Tide last year as a ninth-grader, with an assistant telling his coaches at St. John Bosco High School that Alabama wanted to “throw their hat in the ring” on D.J.’s recruiting.) Williams projects as the top pro-style quarterback in his class, and many of the NFL coaches at the QB Collective praised him as the best of the 40 quarterbacks at the camp this week.

A year ago, Williams didn’t even know if he’d become the varsity starter at Gonzaga High School in Washington, D.C. He won the job in preseason camp, got offered by Maryland just after the season and soon offers poured in everywhere from Penn State to Michigan to Florida State.

Carl Williams, Caleb’s dad, pointed out that Caleb eventually took the offers down from his Twitter page because he didn’t like the attention they drew from fans and media. Caleb Williams did post his Alabama offer, however. “I put the Alabama one up because it’s Alabama,” he said. “I was very grateful for it.”

Williams’ actual destination could take a while to determine, as his dream school, Stanford, can’t offer players in his class yet because of their academic criteria. Williams says he’s spoken to Stanford coaches about what he needs to do to eventually earn a scholarship offer – a core GPA of higher than 3.3 – but knows that he’ll have to wait. “That’s been the top choice,” he said. “Then the other schools come after it. That will always be the top choice for me.”

Why colleges are so quick to pull trigger on an offer

Why offer a player who’ll lead your program before he can drive a car? The answer lies in the glimmer in the eyes of blue-chip Class of 2019 quarterback Hank Bachmeier when he’s asked about his first college scholarship offer.

“February 15 of my freshman year,” he said, beaming at the memory more than three years later. “I still remember it, Colorado. It was an incredible feeling, my first offer. Any other offer never really felt the same. It’s everyone’s goal to get an offer.”

Bachmeier acknowledges that a lot of college scholarships offers are essentially done for marketing. While he ended up committing to Boise State, Bachmeier said it resonated for him long after Colorado pulled the trigger first. “To me it was like, they are the first guys to believe in me,” he said. “They were a top school for me coming to the end.”

That’s the conundrum college coaches must deal with. Waiting to offer could result in getting behind in the prospect’s pecking order. Minnesota coach P.J. Fleck pointed out the difficulty of evaluating the mental part of a quarterback’s game in eighth or ninth grade. “However, physically and fundamentally, you can see how some of these players are getting offers so young,” Fleck said. “It’s such a competitive market, so everyone’s always trying to find an edge … offering early some feel is that edge.”

Fleck said he’s offered quarterbacks as young as the ninth grade, but he adds the caveat that he will only do that if the player is a “no-brainer” as an athlete who could play multiple positions.

Spraying out offers is a luxury that high academic schools lack. Wake Forest coach Dave Clawson said the rate of “non-committable” offers that are “thrown out” irk him. “It is not a good trend for the college coaches, the high school coaches or the prospect,” Clawson said. “[It is] another unintended consequence of moving up [National Signing Day].”

Stanford coach David Shaw has his own approach: “I’m looking for talent like everyone else, but I’d like to see the young man play his junior year to truly evaluate his ability to be an effective QB at our level.”

It’s a trend that doesn’t appear likely to be reversed, barring an NCAA rule to regulate when verbal offers can be made. Credit Murphy, who has charisma and insight that belies his 14 years, for having a pragmatic understanding about the reality of his Colorado State offer.

“It depends on the offers that I have, honestly,” Murphy said whether it will matter. “If I have big SEC or Pac-12 offers, of course no one would pick Colorado State over Bama. They know that, too. But if I’m down to like Colorado State, Nevada or San Jose State, of course that would be in my head.”

On the cusp of high school and two years from getting his driver’s license, Murphy made clear that the more meaningful offers will come down the road. “You don’t need an offer until your junior year,” he said. “That’s when it counts. Right now, it’s an offer for show, basically.”

Somewhere, Lane Kiffin nods his head in agreement. Unintentionally, he paved the way for this trend of offers to show.