Written by Ryan Wright on Recruitingguru.com

Playing quarterback is perhaps the most frustrating and at the same time most rewarding position on the gridiron. Only one quarterback can play at a time and most quarterback rotations, no matter how well intended, normally do not work out best for all parties. The common thread for any athlete in any sport is when opportunity connects with hard work giving said player a chance to showcase their talents. Class of 2018 quarterback Colton Mitchell got limited snaps against Texas 6A competition last year but will be the man for California’s West Ranch High School in 2017.

Mitchell was in a tough situation during his junior year being a throwing quarterback in a run-pass-option offense that was more run than pass. Like a reliever called out of a Major League Baseball bullpen to work his magic or a homerun hitter on the bench called to pinch hit to knock in the game winning run, Mitchell was brought in on passing downs to help move the chains for Leander High School. Executing the offense, Mitchell completed 17-of-40 passes for 141 yards hitting a lot of five-yard outs, flares, and short passes into the flats for the Lions. All of that is set to change with the Wildcats.

The Wildcats run a true spread offense mixing in the run to keep opposing defenses off-balance. West Ranch’s new gunslinger fits the profile of a passing quarterback in the spread ready to stretch defenses across the width of the field and vertically. The 6-3, 200 pound, recruit has hit the ground running since moving to California in April working with noted quarterback coaches Dennis Giles, Greg Holcomb, and Danny Hernandez to sharpen his skills in preparation for his big opportunity.

In a Recruiting News Guru exclusive interview, I sat down with the scheduled starting quarterback for West Ranch getting the inside scoop on his transfer from the Lone Star State to the Golden State, his off-season workouts, and his summer camp schedule. 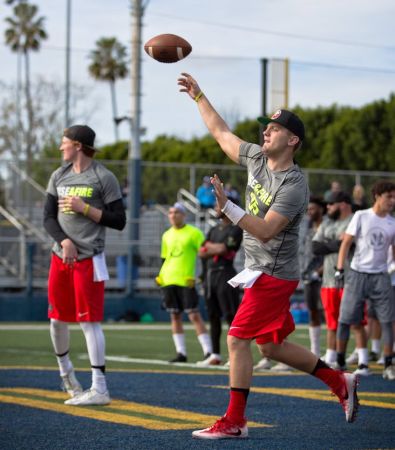 Colton, when did you transfer from Leander to West Ranch High School?

How has the transfer gone so far?

“It has gone really well. My teammates have been receptive, the coaches are great, and I’m working in a great offensive system. West Ranch has been a great environment for me.”

“I enjoy California. It is pretty cool that you can go to the beach and to the mountains in the same day. California has been a welcomed change of scenery. You can’t beat being 45 minutes from LA and the beach, and 3.5 hours from Mammoth.”

How did spring ball go with the Wildcats?

“It went well. Most of it was learning a new system. I pick up offenses quickly so that was no problem. The coaches had an open competition for the QB spot. I believe I am the starter, I’ve been taking starting reps. Spring ball was really good.”

You ran a RPO offense with Leander, what kind of offense will you run with West Ranch?

“We run the spread, but more of a West Coast spread. If you look at Texas Tech’s offense, it is kind of like that. We are a throw heavy team but we can run. We will get on top of defenses really fast this year.”

What are you doing on the practice field to build chemistry with your receiver corps?

“We’ve been staying after practice going through the playbook running routes. I have a great receiving corps. We’ve developed that chemistry needed to be successful. I know where they will be and they know where I want to put the ball.”

What are some of the strengths of your game?

“I can make any throw on the field. I am a pocket guy but I can make plays with my feet. I like playing chess back there against defenses. Something I pride myself on is making any play needed out there.”

What have you been working on this off-season in preparation for your senior year?

“I have been honing my feet with my eyes. QBs need to do that. I’m making sure I am in the best shape I can be in for the season. I wanted to be the best version of myself so I’ve been working out hard. I’ve been fine-tuning things with my mechanics, studying film, and watching a lot of college and NFL guys. I have honed in on recognizing defenses and how to exploit those defenses.”

Have you been working with a quarterback coach?

“I had one in Texas. Since I have been in California I’ve been working with Danny Hernandez. I like him a lot. He is one of those guys that is a really good quarterback coach (at Cathedral HS). Coach (Dennis) Giles, I’ve worked with him at both Dime Dropper camps. When he had a select group in San Diego, I was part of that group. Coach Giles really knows his stuff, he played in the league. It is always good training with him when I get the chance.

“I have also worked with Greg Holcomb. At the end of January, I went to his Rise and Fire Camp in LA (Notre Dame HS). Coach Holcomb and I developed a really good relationship at one of the Dime Dropper camps. I’m going to Chicago (June 21-24) for his elite camp. I’m really excited about that opportunity.”

Did you play any 7v7 ball in California this off-season?

“Yes. I played with my school. We just placed third in a tournament. Tomorrow (Saturday), we play in a tournament in Thousand Oaks at Newberry Park High School.”

Have you attended any camps this spring or summer?

“Yes. I went to an APU (Azusa Pacific) camp. That was a big satellite camp. I’m going to San Jose State on Sunday. On June 25, I’m going to USC for one of their camps. I also went to a Rivals combine when we were living in Texas.”

How did the APU camp go?

“It went well. It is always good being around college coaches showcasing your talents by throwing the ball and showing my understanding of the game. It is great getting interest from different colleges.”

Which schools are showing recruiting interest in you?

“One of the NAU (Northern Arizona) coaches gave me their business card wanting to keep in touch. I have thrown for Fresno State and for Washington State. San Jose State invited me to their camp and APU is showing some interest.”

How did you end up the school year in the classroom?

“They are in the process of getting my GPA straightened out between Texas and California, but they said my estimated GPA was a 3.4.”

Have you taken the ACT or SAT yet?

Have you started thinking about which degree you might pursue in college?

What has you most excited about your senior season with West Ranch?

Colton, thanks for your time today and good luck with the 7v7 tournament and upcoming camps.