Interview: 2020 Massachusetts Dual-Threat Colin Schofield is Coming into His Own as a Complete Player

If the stats do not show it, the game reel will – Class of 2020 quarterback Colin Schofield is coming into his own as dual-threat quarterback capable of beating you with his arm just as easily as his legs. The 6-2, 200-pound, athlete in a quarterback’s jersey completed 117 of 194 passes for 1,543 yards with 18 touchdowns and ran 36 times for 185 yards with four more scores by mid-season and has continued his assault on the opposition. His work guiding the offense has helped Saint John’s Shrewsbury to a 6-3 record and an advancement to the second round of the playoffs and earned him an invite to the U.S. Army Combine in January, an opportunity to showcase his talents on a national stage.

Ahead of another opportunity to prove himself in a playoff game against rival Shrewsbury, I sat down with the rising Massachusetts talent to learn more about his skills and his growing recruiting attention.

Colin, the Pioneers offense has been really strong this year averaging 36 points per game. As a unit, what are you guys doing so well allowing you to be so productive?

“I think we make big plays, that is what the fans love to see. When we are not making big plays, we are executing well within the offense. My coach always says ‘get four yards at a time, that will lead us to the big plays.’ Execution and coaching have led us to being so successful.”

You are an emerging dual-threat talent. As you pick your spots on tucking the ball and running, how has your game improved as a runner this season?

“Coming into the season, I have always loved to run. Before, it was designed runs that were called for me. As the year has progressed, I am able to read the defense to know when to run. On a broken play, I love to use my speed to get a first down. It is fun for me. Because I can run, I like to use it effectively.”

Do you get the sense that your speed surprises defenders when you start moving around?

(Laughs) “They watch film on us. Early in the season they may not been as aware, they were not expecting it. They heard around Massachusetts that we are a passing team. Those designed runs or when I kept it, it surprised them. They started adjusting to it.”

You are obviously very accurate with the rock, what are some of the other things you are doing well this season as a passer?

“I’d say identifying mismatches. That is a key to the big plays that do not come as often as the good yardage plays. I love to take advantage of a mismatch. If my receiver is one-on-one with a shorter corner, we’re are on the same page to make a play – hopefully he scores.”

Looks like you guys run the spread, how does that offense fit your skills?

“St. John’s has a history of passing quarterbacks. Our coaches do a great job of designing plays for us, they help create us and work to make us better. As a freshman, I could throw but I could not make those reads. They have made me into a better QB overall. They know what they are doing. They know how to fit any QB into a spread if he can throw.”

Which technical parts of your game are you always working on in practice?

“My main concern is going to the playoffs with better mechanics. After throwing consistently with a QB coach in the offseason and throughout the season, as the season goes on the mechanics breakdown. Similar to hitting in baseball, leading to a slump when you get tired. You cannot slump as a QB. In practice, I will remember the throws I did not make the game before that I was comfortable with over the summer. I will run those in practice and get those throws down until I feel comfortable with them again.”

Which game was your best this season and why do you consider that to be your best?

“I’d say Week 5 against Shrewsbury was my best game. They are our crosstown rivals; they’ve ben rivals since before I was born. I grew up playing against those guys. It was personal. I knew a lot of people going to the game rooting for me and against me. It was motivating. That week of practice was a good one, we grinded hard. I threw for five touchdowns, which is my season-high. We won (42-34). It was good to get the win in front of my town. We are playing them in the district championship this week.”

I have a question about the big game upcoming. The Pioneers stumbled a little out of the gate but have been on fire since Week 3. That mindset continued in the opening round playoff win against Wachusett Regional (51-26), how did that game go for you?

“It was good. We played them earlier in the season and won. They are always a tough team to play. We knew we could not take them lightly in the playoffs. We scored on our first possession, our defense held against them on their first possession, and then we scored again on our second possession. I threw for four touchdowns and ran for one. There was a lot of hype around the game, people wondering if we could beat them again. We wanted to beat them worse than what we had the first time we played (38-31). We double it in the playoffs. That was a good statement win.”

You guys square off against Shrewsbury (7-2) on Friday, what kind of challenge are you looking at with the Colonials defense?

“They are one of the best defenses we have faced this season. They have good linebackers, defensive linemen, and a good secondary. They are the best coached team we face every season. They will make big adjustments going against what we did well last time. They have athletes, and they will try to shut us down. It is up to us on how we adjust and handle everything.”

With recruiting, which schools are showing interest in you but have not offered yet?

“Bryant in Rhode Island, Dartmouth, Columbia, Lafayette (PA), and Lehigh in (PA) are all showing interest.” 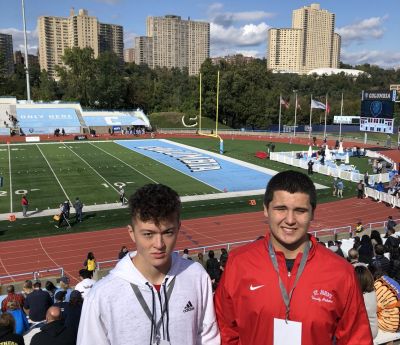 Have you taken any unofficial visits yet?

“Yes. I went to Bryant, Dartmouth, and Columbia for visits.”

How did the Columbia visit go?

“It was great. I really like the city aspect around the campus. When we were watching the game, you look around and see the skyscrapers. Other visits did not have that city aspect.”

What about Dartmouth, how did that visit go?

“It was cool. It was different. There are a lot of woods around the school. I think we had a two-hour drive to get there. It is really nice there, and the team is good. I like it. I have nothing but love for the city. It was cool.”

Do you have any planned visits coming up?

“I am thinking about to Lafayette and Lehigh as well. Those are a couple of schools I am interested in checking out.”

Colin, thanks for your time today and good luck in the playoffs.