Most high school coaches are lucky to have one legitimate quarterback on the roster much less two. Lucky for Westlake Warriors head coach Tim Kirksey, the next man up attitude in the pocket is working out seeing Class of 2020 quarterback Patrick Roberg rise to the occasion as the team works through a tough stretch of Marmonte League games.

Roberg has seen action in five games this season starting the last four. In those five games as a temporary starter in place of fellow junior Marco Siderman, Roberg is showing vast improvement having thrown for 900 yards with seven passing scores and two rushing touchdowns. He even has a 400-yard game to his credit. The 400-yard game has not gone to his head, he understands the importance of improving his overall skill level week in and week out while playing in one of the tougher conferences in California.

With his play on the field, size (6-3, 205), and summer camp tour, college coaches are starting to find Roberg in a hurry. Pac-12 and Mountain West teams having Roberg on their board and that status is growing among Big Ten and ACC programs as well.

In a Recruiting News Guru catch-up interview, I sat down with one of the rising quarterback talents in the Golden State to see how his game is coming along on a very talented Westlake squad.

Patrick, how has the season gone so far for the Warriors?

“We’ve had a pretty good season. We are 6-2 and have had some great wins. Still, I feel like we have not dominated a team fully yet the way I think that we can. We’ve been playing down to the level of the teams we are playing, except the Moorpark game – we dominated that game (34-0).”

After two tough losses to Grace Brethren (24-6) and Calabasas (20-14) the team turned it back on downing St. Bonaventure 39-7. What was the difference for you guys in the win over Bonaventure?

“We were high off that win against Moorpark going into the Grace Brethren game. I feel like we did not prepare to the best of our abilities that week. I think we were kind of kicking back, we lost 24-6. Grace Brethren is a team we feel we should have beaten.

“Calabasas, they are a great team. We came out better prepared for them. We were up 14-0 at halftime, in the second half everything went wrong. We had a fumble they took advantage of, a lot of mistakes, and they won 20-14. That was a heartbreaking loss. We were upset after that game.

“We had a bye last week after we played Bonnie; we won that one 39-7. We did not dominate that game, we went with the flow that game. We used the bye week to our advantage, we are ready for our homecoming game against Newbury Park. We are focused on the game this week. After Newbury Park then we get Oaks Christian (8-0) – they are our No. 1 rival. I think they are nationally ranked which will make it even more exciting.”

*Oaks Christian is ranked No. 20 nationally by MaxPreps

For you personally, what adjustments, big or small, have you made to your game this season?

“I am trying to get that urgency on the field. At first, I was making the moment bigger than itself. I was getting caught up in that. I had to keep reminding myself to take a deep breath and relax more. Each time I play, I am getting a better feel for the game. I am getting the tempo of the game down; I am playing varsity for the first time. I am giving it my all in practices and in games. I am getting more of the mental game down; I am improving a lot in that aspect of the game.”

The Warriors have played so tough teams this season as mentioned, of all the games which has been the most challenging for you?

“I think the Grace Brethren game. I don’t think we prepared well as mentioned. That game I was not myself. I panicked a little. That was a difficult game for the entire team. They ate up a lot of the clock, and when given some chances I made some risky decisions and skipped the short passes they were giving me.”

How did that challenge help make you a better quarterback and leader?

“I learned to take what the defense is giving you.”

Which game has been your best this season? 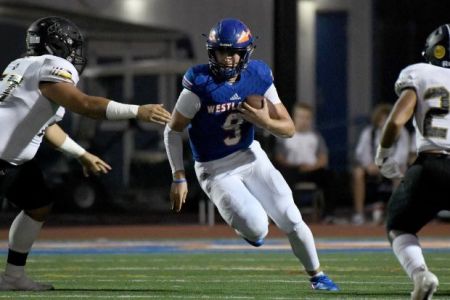 “The Moorpark game was my best. That was my first start. I was ready to play that game, I felt comfortable. I was engaged. I almost broke the record for passing yards in that game. I was fully engaged and at my best.”

How many yards did you throw for in that game?

“I threw for 408 yards with three touchdowns and rushed for one touchdown.”

Wow. That definitely counts as a top game. This week’s game is against Newbury Park, what are you expecting from their defense on Friday?

“They play a lot of Cover 3. Every game they play they switch up the front and looks. They will focus on Jordan Patterson; he had 200 yards and two touchdowns last week. They will also key on Jason Heller as well. That should open up our slot and tight end. We have some new stuff that we have put in this week. It is important for me to get the ball in the right hands this week against Newbury Park.”

Going into recruiting. Which schools are showing interest in you?

“Louisville is showing a lot of interest. Coach (Nick) Petrino (quarterbacks) has been talking to me for a good amount of time now after I went to their camp this summer. He has showed a lot of interest in me. UCLA, I have communicated with Coach (Paul) Rhodes (defensive backs) and their head recruiting coordinator. Oregon State is showing interest. Coach Brian (Lindgren), their QB coach, came to see me on Thursday. Cal is showing interest from over the summer after one of their camps. I am also receiving a little bit of interest from San Jose State, Indiana, and Illinois.”

Which schools have you taken unofficial visits to so far?

“I visited Louisville, I went with some of my coaches. That was fun. I got to go with one of my friends as well. I have been to a couple of UCLA games this season. I also took a tour of Cal over the summer.”

Which UCLA games have you seen this season?

“I went to the UCLA against Washington and against Fresno State.”

Do you have any planned visits upcoming?

“I may go to a Louisville game sometime soon. I might go to a Cal-Poly game and another UCLA game. I want to go to their game against USC if I can.”

Patrick, great catching up with you today and good luck on Friday against Newbury Park.