Interview: Beau Green is a Rising 2022 Dual-Threat to Watch Out of Downey

Every season there are surprise players that rise up in every grade classification that take the high school ranks by storm. One freshman that killed it during the 2018 season was Beau Green. Green proved to be a rising recruiting prospect with Downey High School after completing 65 of 105 passes for 1,021 yards with 11 touchdowns in five games played. The 6-2, 200-pound, gunslinger also has some dual-threat talents rushing for 121 yards off 21 carries with four more scores going up on the board. Green’s style of play and upside has started stirring recruiting interest with Fresno State and San Diego State, among others, putting him on their board for the 2022 class.

In an RNG exclusive interview, I sat down with one of the rising talents in the pocket out of the Modesto area to learn more about his growing skills and early recruiting prospects.

Beau, you got to live the dream playing varsity ball as a freshman, and you did it well. How did the coaches work you onto the field in 2018?

“I knew coming into the season I was going to play varsity. I was splitting time with Bryce Gouker, a junior. My coaches started me off slow with easy reads and easy throws, and then it was all out.”

How did you prepare for the 2018 season?

“Over the summer, every day I was throwing with my dad and working out in the gym. Varsity football is far different than eighth grade football. I watched a lot of film to prepare and studied getting to know the offense.”

Once you got some live action against varsity competition, what were some of the adjustments you had to make to your game?

“I started getting rid of the ball faster, making faster reads, and making better decisions. Early on, I tried to force things in the first couple of games, but once I got that down I made better decisions.” 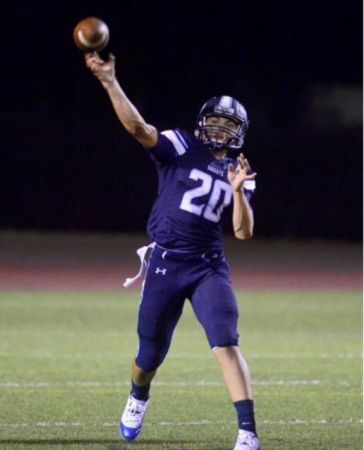 Which areas of your game improved the most throughout the season?

“The mental side of the game improved the most. Playing youth football, you do not watch film. At the varsity level, I was coming into the games I more prepared for pre-snap and post-snap reads. My timing improved. At the lower level, they are not as fast you so you do not have to anticipate as much.”

What was your “welcome to varsity” moment?

(Laughs) “It was in my second game. We were playing against the former section champs. On my first play throwing the ball, I got hit in the face two seconds after I threw the ball. The guy that hit me stood over me trying to send a message.”

Given your age and underclassmen status, I am assuming you were hazed verbally from the opposition trying to throw you off your game. What were some of the funny things said to you by the opposing defenders?

“I was receiving DMs (direct messages) on Instagram and Twitter on social media. It is funny. You know you are on the right path if people are coming after you.”

Do you work with a quarterback coach?

“Yes. I work with Danny Hernandez in LA. I try to spend as much time as I can with him when I am down there.”

When you work with Coach Hernandez, what are you guys focused on with your workouts?

“We are focused on a lot of awkward throws, odd arm angles. Other QBs work on standing tall. We are working on game real-estate throws and making the tough throws under pressure.”

Have you set your offseason goals and what you want to work on yet?

“This offseason is huge in terms of getting better and improving as an all-around football player and QB. I am playing 7v7 this season. I want to make my mark with 7v7. My goal is to work every day to get better.”

Which 7v7 team are you playing with this spring?

“I am playing with 15u Elevate out of Stockton.”

Are there any upcoming camps and/or combines you may attend?

“Yes. I will compete at the U.S. Army All-American Combine in January, I may attend Polynesian Combine in Las Vegas, and I will be competing in the U.S.A. International Bowl in January.”

Busy man. With recruiting, which schools are showing interest?

Have you had a chance to take any unofficial visits during the season?

How have the Fresno State visits gone?

“They have gone really well. I have received more and more interest each time I go on a visit to Fresno State. I hope I get an offer from them. I really like them. The campus is about 30 minutes or so from home.”

How did the San Diego State visit go?

“It was pretty awesome. I really love San Diego. That was my first time to the city during the visit. I loved it. The campus and coaching staff is awesome. It was a good visit all around.”

You have the Fresno State visit planned, do you have any other visits you may possibly take?

“We might visit Washington State for the Apple Cup Game against Washington. We are considering that visit.”

Beau, thanks for your time today and good luck with your visit on Saturday.