By Ryan Wright as published on RecruitingNewsGuru.com

Those in and around the Redondo Union High School football program saw all the potential and upside coming. Another year in the offense, some key pieces stepping up, and a lot of hard work in the offseason has catapulted Jack Alexander to another level in the pocket giving rise to the Sea Hawks being a team few want to square off against in 2017.

The jigsaw puzzle of a high school roster fitting talent on-hand with a scheme showed a lot promise with Alexander leading the way last season. The 6-3, 190 pound, rising star hit 126-of-222 passes for 1,573 yards with 19 scores posted. In a limited role, he also ran for 142 yards with three more touchdowns going up on the board.

The Sea Hawks scratched and clawed their way to a 7-5 season in 2016 and are off to a 1-2 start this year, but things are different… much-much different. The Division-IV squad jumped up a level in the season opener taking on Rancho Verde and then pushed another Division-III team, Villa Park to the end before falling 28-21 in a hard-fought game. Undaunted, the following week the Sea Hawks welcomed Division-I Westchester taking no mercy in a 49-12 going away win. 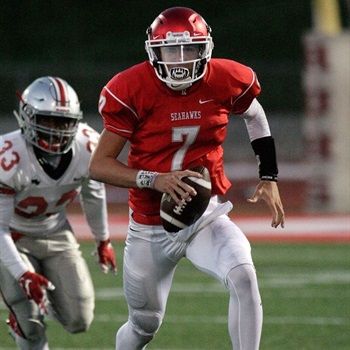 The common theme in Redondo Union’s rise in play coincides with Alexander’s play on the field. In the big win against Westchester, Alexander completed 19-of-24 passes for 241 yards with four scores hitting 79 percent of his pass attempts. One of the bigger additions to his game during his senior year is the ground attack. Not asked to do much as a junior, against Westchester he changed the complexion of the game with seven totes for 97 yards lighting up the board two more times. That kind of production has been commonplace for the Los Angeles area talent hitting 57-of-80 attempts for 660 yards with eight scores against just one pick this season. The 71 percent passer completion rate is fantastic as is the 220 yards per game in the air attack but his 35 carries for 304 yards with five scores is a program difference maker.

The spring evaluation period brought plenty of interested schools to Redondo Union’s campus with all waiting to see how Alexander’s senior year plays out. The interested programs include Arizona, Washington State, USC, Stanford, Toledo, Arizona State, and pretty much all of the Ivy League schools among others. The momentum building on Alexander’s senior season, along with his offer from Cornell, should make him one of the hottest quarterbacks in the nation when the early signing period comes along in December.

In a Recruiting News Guru exclusive interview, I sat down with Alexander finding out the differences in his game from his junior to senior year, the outlook for the Sea Hawks over their final seven regular season games, and his growing recruiting interest.

Jack, you are starting the season off putting up some great all-around stats for the Sea Hawks, are you doing anything differently this year than last that is allowing you to be even more successful on the field?

“My mental approach is a lot different than last year. I am more confident this year after a year of starting varsity experience. That helps. The no-huddle system we run helps as well. I trust my offensive coordinator, my O-line, and my receivers. The confidence I have this year has shown in our games.”

Last season you tucked the ball 43 times for 142 yards with three scores. This year you have shot past that mark with 35 carries covering 304 yards with five trips to the end zone, how are you approaching the running part of your game this season?

“The big difference is more designed quarterback running plays. I have gotten faster and stronger which helps. I run with a chip on my shoulder. I’m not going down when I get hit the first time but I’m also running smart not taking unnecessary shots.”

Are you enjoying running the ball more this year?

“I’m loving it. I always felt like I could run the ball. With me running, it gives me more to offer my team. I’m glad I can do it this year to help us win games.”

You’ve worked hard throughout the offseason to get ready for your senior year, now you’re putting it all to practice, which areas of your game have improved during the second season pushing you forward at the quarterback position?

“My pocket presence, staying in there trusting my line, my footwork, and finding the right spot to deliver the ball. My reads are better too. I have had no major miss-reads. I am taking what they are giving me and not forcing anything.”

The Sea Hawks go on the road to face West Torrance on Friday, how will you attack their defense?

“Through all aspects of our offense. We will throw on them and run on them. We put up points on them last year (won 58-10). I feel like I have grown as a player and our O-line has gotten better. We plan on scoring a lot of points and doing it fast with our up-tempo offense.”

How is the team looking top to bottom as you inch closer to league action?

“We’ve had a couple of injuries but I think we are more well-rounded this year. We get some guys back when league starts due to injury and the sit out period. Once we get those guys back, things will get even better. I think we can do some big things this year. I feel like our record is misleading.”

What are some of the areas of your game you are continuing to work on in-season?

“From a throwing standpoint, being accurate, staying in the pocket, giving my receivers a chance to make plays, playing smart, and when I run protecting the football and not taking any unnecessary hits. One of the main things I have been working on is my leadership. I am a competitive guy. I am finding the balance of not being too competitive and being a good leader – a positive leader. I have been doing a good job of that. Our locker room is positive. We feel like we can make a run over the next couple of weeks.”

College programs from across the country are aware of you showing various levels of interest. Which schools are showing interest now?

“San Diego State, Arizona State, UNLV, USC, Azusa Pacific, and Ivy League schools like UPenn (Pennsylvania), Brown, and Columbia. I’ve been getting a lot of positive feedback on my film. The school I may end up going to may even surprise myself.”

Have you taken any unofficial or official visits yet?

“Last Saturday I went to San Diego State for the UC-Davis game. It was a last-minute opportunity. They called me Thursday night inviting me down. We took off Saturday morning for the game.”

How did the visit go for you?

“It was cool. I got to talk to their coaches. They are not sure if they are taking a 2018 guy yet, but it was cool to meet them and see the game.”

If they are to offer you, did they tell you what they are looking for from you to be their guy?

“No. They told me they liked my film and they would be in touch, especially if they do take a 2018 quarterback.”

Do you have any other visits planned?

“I might check out a USC game coming up. I might also go to a University of San Diego game. I have to check our schedule and their schedule to see if anything lines up. I did get a game invite from Sac State (Sacramento State).”

Let’s finish up in the classroom. How is everything going with school to start your senior year?

“We started school a couple of weeks ago. So far, I am staying on top of everything. My main focus is keeping a 4.0 GPA. That is my main priority.”

What is your cumulative GPA?

What is your best test scores on the ACT and SAT?

Very nice. What is your favorite class so far this year?

“AP Stats is interesting. I like my Intro to Broadcasting class. That is a field I am interested in for after college. The class is a lot of fun.”

Jack, thanks for your time today and good luck with the rest of your season.

If RNG has helped you, a friend, or a family member through an article, video, or stylized interview with our countless hours of free promotion for high school, junior college, and college athletes – please donate. Any amount is appreciated!