Posted on May 16, 2018 in High School Quarterbacks, Nathan Priestley.

As published on RecruitingNewsGuru.com by Ryan Wright

The 2017 season did not go exactly as planned for Nathan Priestley, but the groundwork for a breakout senior season was set. The 6-4, 210-pound, signal caller appeared in five games for Loyola High School completing 23 of 39 passes for 288 yards with two touchdowns without throwing a pick. Enough next level potential was showcased during his junior campaign to attract interest from UCLA, Arizona State, Washington State, and Oregon State, to name a few, with a crowd ready to gather depending on how his senior season turns out. In the midst of a focused offseason workout schedule, I sat down with the Class of 2019 Los Angeles area talent to learn more about his skills in the pocket and the progress with his game over the spring months.

Nathan, how did your overall game improve last season?

“Last season, my game improved with the playing time. The reps in the game were great. I essentially sat my sophomore year as a backup. The game was much faster, but I adjusted. My leadership role last year improved as well.”

Which aspects of your motion or technique really came along last season?

“My game improved mostly with my emotion, handling certain situations, and leading by example. With my technique, I threw well, was accurate, and I did a good job of standing in the pocket.”

What are some of the more common routes you throw to within the Cubs offense?

“We throw a lot of speed outs, come backs, a lot of rhythm routes.”

How does the offense fit your skillset?

“It fits my skill set because they allow me to run. We run RPOs; my coaches give me the option to run or pass. I have a lot of control within the offense.”
What are you working on this offseason?

“This offseason I am working on my footwork; college coaches want to see that improvement in me.”

Are you working with a private quarterback coach? 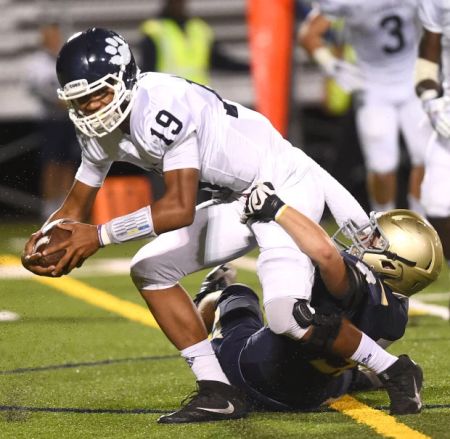 “Yes. I’ve been working with Danny Hernandez. We’ve been working on throwing on the run and off the platform, all the throws I need to make at the next level. I am also working on being consistent with my release, using my legs and hips in my throws, keeping my elbow up, and being as accurate as possible.”

It is an unfair question to ask for a comparison, but is there a quarterback at the collegiate or NFL level you have a skillset similar to as long as you continue to develop as you plan?

“Deshaun Watson (Houston Texans). We are both righties and about the same height. I like his style of play and how he carries himself.”

Are you going to any camps this summer?

“Yes. I am going to a UCLA for sure. I am still trying to see how spring ball goes. I will plan out the rest of my summer from there.”

Which schools are showing interest?

Have any college coaches come by Loyola to see you in person this offseason?

Have you taken any unofficial visits this offseason?

“I have been up to San Jose State, UC-Davis, and Oregon State.”

Do you play any other sports for Loyola?

“I played baseball, but I laid off it this year to focus on football.”

When do the Cubs start spring ball?

“How is the team looking so far in 7v7 and/or in the weight room?

“We look good so far in the weight room and throwing routes on our own. We are losing a lot of guys, so our sophomores are going to have to step up. I think we’ll be fine. We have some ambitious guys on the roster. We will be ready for the season.”

Is there a personal goal within your control that you want to accomplish before the 2018 season begins?

“My goal is to better my game overall, mentally and physically, and be a better player and teammate in general. I want to be the best I can be and bring my game up this offseason.”

Nathan, thanks for your time today and good luck with spring practices.