Justin Fields’ Baseball Background Helped Develop Him Into a Better Quarterback, and It Could Be a Factor in Ohio State’s Future Recruitment of the Position 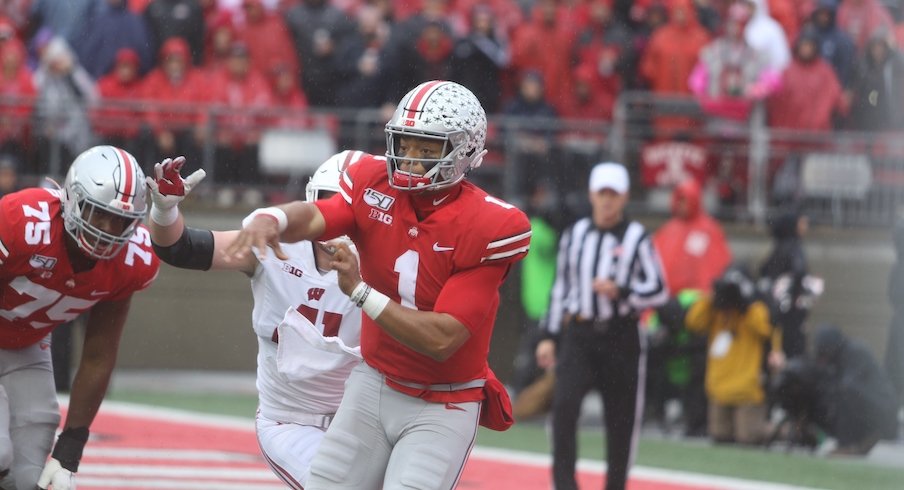 As written by By Zack Carpenter and published on ElevenWarriors.com

Danny Hernandez is a nationally known quarterback trainer and developer out of STARS Sports Training and Rehabilitation Center in Anaheim, Calif.

He jokingly agrees that he’s essentially the “quarterback dad” for these kids he mentors.

Truthfully, he’s just like many American dads in that his a lot of his “sons” fell in love with baseball as their first sport.

Hernandez has seen several of his quarterbacks, most of whom are Ohio State targets, come to him with an innate ability to throw the ball from different arm angles and show off terrific footwork because of that baseball background.

“Some of these guys are second basemen or shortstops flicking the ball like they’re trying to turn a double play,” Hernandez told Eleven Warriors. “You really end up thinking that they are. Obviously, DJ is (a baseball player) so he’s able to do stuff like that, but it’s funny. We’ll work with having to throw the ball when we aren’t able to set our line with our feet. Trying to find that coil and turn almost like we’re trying to turn a double play because there really are throws that happen like that.

“Those are the skills that translate so well to quarterback. When I get these parents who wanna come over and get their kids specialized already at 8, 9, 10 years old, I’m like let ’em play basketball and baseball and all that other stuff because the stuff they’re learning there is going to translate over to here. If you want them to put everything into football, that’s great. And maybe he will end up being a superstar quarterback, but if you put him in the position where he’s playings one of these other sports, it really will translate to what we’re trying to do at quarterback.”

It’s far from the only sport Hernandez believes offers great value in creating a better quarterback.

Basketball helps with spatial awareness, understanding movements in the pocket better and creating angles. Golf swings are similar to lower-body mechanics, as Hernandez relates staying connected on tee box swings to staying connected with your back foot and keeping your shoulder closed when throwing a football. Tennis can aid in developing velocity and creating twisting arm angles.

But baseball is what we are focusing on today.

“When a guy has a baseball background, I’m able to relate it really well (to playing quarterback),” Hernandez said. “There are some guys that haven’t played baseball in years, but I’ll tell them those things and they’re like, man it makes so much sense when you talk about the baseball stuff because it really does relate.

“With a guy who plays baseball, that move is a lot more natural. Somebody who hasn’t, it’s a little bit harder. … One of the things I tell guys I love about guys with a baseball background is, one, the hand speed is really good. They’re really good with the quick game and getting the ball out and with the (run-pass option) being able to set my line. It’s like an infielder. He fields that ball, boom, he’s able to get himself with his shoulder closed to his target and his feet lined up to that target and hip lined up to make that throw to first base.”

When it comes to Ohio State football and its quarterback recruiting, baseball could start becoming a factor in the program’s scouting of the position. Its current quarterback has shown plenty of reasons why a baseball background is beneficial, but one play stands out above most others.

Backed up inside his own 10-yard line, Justin Fields dropped back on a 3rd-and-10 against Wisconsin’s defense as the first quarter’s final seconds dripped down.

In a highlight-filled season that’s become worthy of a possible trip to New York, this was one of Fields’ finest plays.

First, he calmly steps up in the pocket to casually pin ball an edge rusher off his hips into the turf. That’s before he obeys the “Five Ds of Dodgeball” – keeping his eyes downfield throughout – before ignoring two Badgers bearing down on him to fire a 17-yard fastball down the left sideline to J.K. Dobbins.

The play felt like it lasted more than 10 minutes. From the time the laces land in Fields’ fingers to the moment he spins them toward Dobbins, Fields had taken up 6.7 seconds. An eternity in the pocket and a clinic on how to buy time amidst pass rushers.

It’s just one play this season in which Fields showed off his special athleticism. But in the biggest game of his college career to date, it was showcasing what made him at one time an elite-level MLB prospect in high school with potential to develop into a top draft pick.

Getting his toes pointed toward his target with swift footwork, he fluidly squares his shoulders and flips a quick strike to Dobbins while falling to his left.

It’s eerily reminiscent of the plays he used to make as a middle infielder growing up in Kennesaw, Ga., where he starred as a shortstop and second baseman for the Harrison Hoyas.

On its surface, it looks like that baseball background could at least be partially to thank for giving him a seemingly natural ability to make smooth plays like that one against Wisconsin.

So, we asked him … does he ever credit baseball for helping him become a better quarterback?

“I think so,” Fields said. “I think a lot of good quarterbacks have played baseball before so I’m just glad my dad had me play it as a kid. That’s the first sport I started playing. I started playing baseball when I was like 3 years old. I didn’t start playing football until I was about five.”

It’s not just baseball, in Fields’ opinion, that aides in creating a polished quarterback, but with baseball specifically, it helps with “a lot of things.”

“Getting the ball out quick and stuff like that, I think the (baseball background) helps a lot,” Fields said. “And it helps with hand-eye coordination and stuff like that, and just movement – like side-to-side movement and horizontal movement. I think just playing more sports makes you a better athlete overall so I feel like doing different movements like that makes you a better overall athlete.”

Fields is the local example we can illustrate of mechanics, footwork and movement developed on the diamond translating itself to turf. It’s helped him become one of college football’s best quarterbacks and Ohio State one of the sport’s best teams this year. Without Fields – and probably without that baseball history – the Buckeyes don’t have one of the most electric quarterbacks in the country and own a spot in the current College Football Playoff projections.

OK … so watch a noon Buckeyes game on FOX from your couch, drink a Bud Light or 12, get a good night of sleep and flip the TV onto the same channel when you wake up, and you’re going to see the same types of things on a bigger scale when Russell Wilson leads a two-minute drill (again) to perfection for a Seahawks rally.

… Maybe it’s not an end-all, be-all case, but baseball backgrounds have a heavy influence on the position.

It’s part of the reason why Wilson has become one of the best QBs in the game’s history, why Patrick Mahomes became the youngest to win the MVP award in more than three decades, and how Kyler Murray is an Offensive Rookie of the Year frontrunner.

(Those links under the players’ names send you to their Perfect Game high school baseball recruiting profiles, and here’s Fields’ profile.)

The baseball backgrounds are having an impact on how some of the best quarterbacks in the nation are being trained, how they are performing at the highest levels of the sport, and it’s possible it could impact how the Buckeyes recruit the most important position on the field.

So down the line, if Ohio State ends up getting another second baseman or shortstop as its quarterback of the future, don’t be shocked if he turns into a home run.