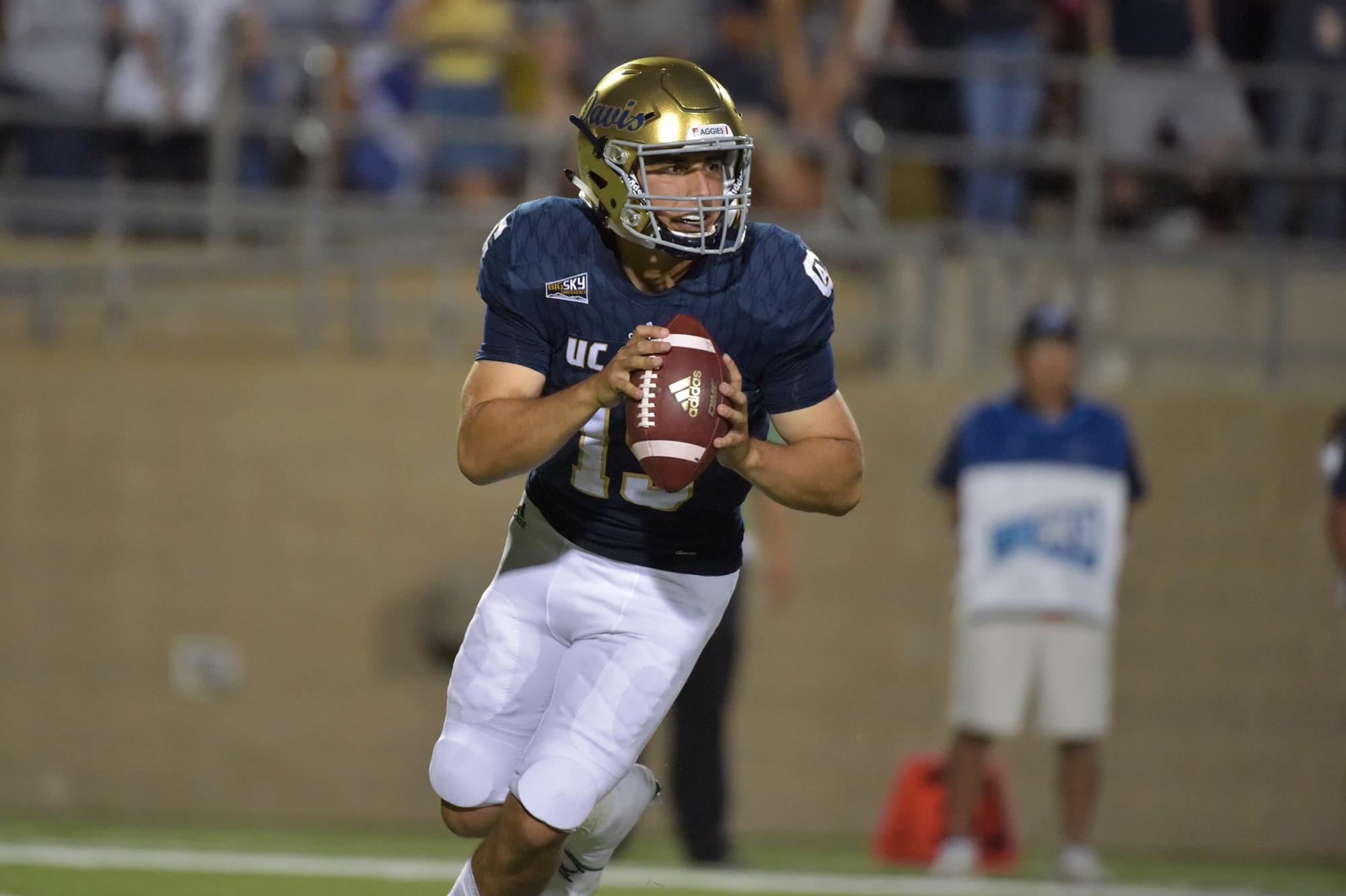 As published on the UCDavisAggies.com site

When is a full-court press a football term?

It was coach Dan Hawkins who borrowed the phrase when he first returned to UC Davis to coach the Aggies after the 2016 season.

They knew of a guy named Jake Maier at Long Beach City College.

Maier had just finished his freshman campaign with 3,689 yards passing, 38 touchdowns against just 8 interceptions. He earned an armful of honors that included a Southern California Football Association Player of the Year trophy.

The elder Hawkins followed up on his son’s and Tucker’s lead. A few films, a chat or two with Maier and the die was cast.

“When Tim Plough committed to us in January (of 2017) as offensive coordinator, I said ‘Go get Jake Maier,'” remembers Dan Hawkins.

Plough said that was new coach Hawkins’ No. 1 priority and the Aggies did everything they could to convince Maier that Davis was the place to be.

Plough did his job and the ensuing result was a record-setting 2017 season in which Maier drove the Big Sky Conference’s most prolific offense to new heights.

The 6-foot, 200-pound signal caller threw for 3,669 yards (sixth in all of the Football Championship Subdivision). He clicked for 26 scores with only 10 picks. His efficiency rating of 152.5 was 13th in the land, and his 333 yards a game ranked fifth nationally.

In a league that produces elite quarterbacks by the bushel, Maier led the pack.

Now the former St. Paul High (Santa Fe Springs) MVP is set to embark on a season that he and teammates hope will return UC Davis to its former glory — a history that saw the Aggies once put together an NCAA-record 37 consecutive winning seasons.

(Such has Maier’s stock grown that he and other-worldly wide receiver Keelan Doss are both on the Walter Payton Watch List.)

“When I arrived, Hawk told me ‘Congratulations, now go get Jake Maier,” laughs Plough, who spent his first days back in Davis watching Maier films, then chatting with the young man who he hoped would be his new quarterback.

Three days later, Plough was in the Maiers’ living room: “It was easy to understand why Dan Hawkins liked him so much.”

While Plough was singing the praises of a UC Davis education, other Big Sky schools and Nevada had finally discovered Jake. The race was on.

In high school, Maier was a two-team All-Angelus League first-teamer who ran as ably as he threw (accounting for 11 rushing touchdowns and nine throwing one season).

On the Swordsmen’s baseball squad, Maier hit .360 his senior year, and was selected as the team’s MVP.

“I don’t really know,” Maier says. “And I don’t worry about it. I know that everything happens for a reason … and it all worked out eventually.

“(Players) get exposure at different times, and for me, it just came a little bit later than most. Now, I’m just fortunate to be here. A lot of guys don’t make it this far.”

Maier eventually was offered a scholarship by Sacred Heart University (Fairfield, Conn.), but he redshirted his freshman year and quickly discovered that he needed to be near his family and friends.

He headed “home,” alighting at LBCC.

“Looking back, I couldn’t be more grateful for that time because it drove me to get to this point,” Maier said of his time just outside the spotlight. “If it weren’t for being overlooked in high school, maybe I wouldn’t have worked as hard … developed such a chip on my shoulder.

“I don’t regret those times at all. It’s what helped make me, for sure.”

“I just kept working. I had the right people in my corner. I had the right support. I had talks with my mom and dad all the time — very emotional talks — and they just kept me going,” says the quarterback, who also credits Long Beach mentors OC Sean Flynn, head coach Brett Peabody and personal coach Danny Hernandez for much of his development.

“The people at Long Beach were a blessing to me. I’m still close with those guys. And Danny Hernandez: I don’t feel that guy gets enough credit for who I am as a player. He’s been there for me since I was a junior in high school. He always believed in me.”

Now, Plough, Hawkins and about 100 teammates believe in Jake Maier. And the support that Jake had from Southern California coaches and his family has been strengthened in Davis by new folks in his corner.

During recruiting, Maier grew in confidence that UC Davis would be his choice.

“They were honest,” Maier said of Hawkins and Plough. “There wasn’t anything during that whole process where I felt I couldn’t trust them. They were both family people. Coach Hawkins is a trustworthy guy … raised with those same core values I have.”

They told Jake he’d have the opportunity to compete for a starting role without promising anything. In Jake’s words, here’s what happened next:

“And I did have to compete. I had to work hard for it: prepare like I’ve never prepared before and I had to win the team over as quickly I could … build a trust with those guys.

“And Coach Plough? He’s a genius. That guy is one of the smartest football minds I’ve ever been around. And once I realized what he can do for me on the field and the life teachings he’s provided me … it’s been priceless. There’s no way I could have passed that up.”

Plus, campus curriculum went hand-in-hand with his mechanical engineering major.

Plough said he learned humility and integrity from from former UC Davis head man Bob Biggs, for whom he played and coached. He said frequent sit-downs with Aggie Pride patriarch Jim Sochor made him “even a better person.”

Plough says Jake is loaded with integrity and humility and he told the story of his quarterback last season and this year:

“He is an extremely humble, high-integrity guy. Last year, to come into the job and understand, ‘Hey, C.J. Spencer has been here a while, Brock Dale’s been named captain … clearly these are guys that (teammates) like.

“So Jake is thinking, ‘I don’t need to beat these guys out as people, I just have to try to be the best quarterback. I’m going to take a backseat as a leader and be a good quarterback.”

With Dale’s graduation and adjustments to Spencer’s role (six touchdowns in 2017 as the Aggie’s Swiss army knife), “a switch flipped and Jake became arguably the best leader I’ve ever been around from a coaching standpoint,” Plough says.

While Maier managed to throw the ball around last fall — he completed passes to 17 different Aggies — his favorite targets were All-American Doss and All-Big Sky tight end Wesley Preece (9 touchdowns).

“The thing about Jake, he’ll throw the ball with three defenders there but he’ll make the ball perfect so you can catch it,” relays Doss. “The offense is designed for him to spread the ball, get it out quick … and as you’ve seen, he does a great job of that.

“He’s a baller. A real leader. A student of the game. A great teammate. I could go on and on about Jake. The dude is a huge reason why this program is turning out to be where it needs to be. I can’t thank him enough, honestly.”

Maier has mutual respect for Doss:

“He’s been a leader, for all of us. Keelan’s been through some of the toughest times here. Now, to see him be at the front and lead us through the time where the team is going to grow and we’re going to be a better team this year … a lot of that is a credit to guys like him that have stuck through it.

“Personally, Keelan makes my life so much easier on the field. I can always count on him — and it’s been really nice to get a full off-season with him for the first time. We’re looking forward to doing a lot of great things this season.”

So, Jake. Tell us something nobody knows about you…

You can see him trying to come up with something out of the ordinary when he’s away from football: “Family means so much to me. That’s something I’d want people to know. And how much I value family time. I’m a kid at heart: I love going to Disneyland, going out to lake, I love snowboarding.”

(Don’t worry Coach Hawk, the slopes have been put on hold.)

“I guess I’m kind of an outdoors person,” Maier concludes. “I have a strong religious faith and I appreciate all the simple things. Not someone who stays out late. Not a big-crowd guy. I guess I’m someone who is really, really low-key.”‘

Until he gets a football in his hands.

While I Have You Here: Jake has two baseball-playing brothers at St. Paul High — Jared and Kyle. His mother Lori teaches at the school and dad Jim is the softball coach at Cal State San Bernardino. And Maier remains his brothers’ biggest fans: “Really, to me, the tough sport to play is baseball and those guys are great at it. They’ve jumped me in terms of athleticism and talent in the family. A lot of talent, a lot of skill. Always doing leadership stuff. They’re awesome.” And those basketball games in the driveway? Who is winning those? “Oh, I am. Undefeated, absolutely.” …The Aggies home the 2018 season Thursday, Aug. 30, at San Jose State.

— Bruce Gallaudet is the former Davis Enterprise sports editor who has been around Aggie athletics since the 1970s. He also writes “Aggie Corner” each Friday in The Enterprise (www.davisenterprise.com).