Written by Ryan Wright as published on RecruitingNewsGuru.com

Each recruiting season the state of California produces arguably the best and the deepest quarterback classes for next level scouts to fight over on the way to collegiate success and glory. Another rising talent with tremendous upside starting to breakthrough at the varsity level drawing collegiate attention is Class of 2021 Long Beach Poly dual-threat Jake Garcia.

The future for Garcia is wide-open with the present showing a lot of promise for upcoming seasons against tough California competition. Garcia already displays many of the attributes college coaches love. He has the size and frame at 6-3, 185, the footwork, poise, arm, and football IQ desired. In five games against competition his grade level, he has completed 30-of-42 passes covering 458 yards with five touchdowns against just one pick. When needed, he can extend drives with his legs rushing for 165 yards off 14 totes of the pig skin.

Freshman level stats are one thing, but Garcia has something else going for him – playing against California Division-I varsity competition. The freshman has appeared in three games for the 6-1 Jackrabbits showing his skill level transcends to the next level hitting 13-of-15 passes for 240 yards with three touchdowns. In a freshman like way crossed with The Natural, on Garcia’s first varsity level drive, he took a sack on the first play and then proceeded to drive his team down the field 90 yards throwing a 43-yard touchdown pass to cap it off.

In a Recruiting News Guru exclusive interview, I sat down with one of the rising stars in the Golden State gaining insight on his freshman season and varsity experience.

Jake, first, congratulations on getting the call up to play varsity ball.

What has the varsity experience as a freshman been like for you?

“It is always good to be up with those guys and to receive the experience with the coaching. We have top level coaching with all the NFL experience on our staff. Matt Griffin (freshman) and I, the coaches have been great with us. I have learned a lot since the offseason. I’m reading defenses better and digging deeper learning more about the game. The talent level and speed of the game has been fun to compete against.”

What did you work on during the offseason to help prepare you for playing at such a high level this season?

“I worked with quarterback coaches, Danny Hernandez specifically. We went over game time situations, worked on movement in the pocket, and throwing on the run. We were fine-tuning everything. I worked out a lot trying to put on some weight. Since I found out I was going to Poly, I worked on building a chemistry with the other guys.”

How did the coaches notify you that you had made the varsity roster?

“It was late in the process actually. It showed up on MaxPreps. Coach Kim asked me how tall I was and how much I weighed, and that was it. I was working out with the varsity over fall camp. I was always competing for it hoping to get a shot at earning a spot on the varsity roster. I kept working for it and it came true. I have to keep working hard to get better.”

What was the first couple of snaps like for you against Division-I California competition?

“They threw me in against Milikan, that was my first game. I went in, I knew I was going in third quarter – Matt got the beginning part of the quarter. Coach Hatch told me the play on the sidelines. As soon as I stepped on the field, my mouth got dry. I was thinking I should have had more water. The players were pumping me up. I was trying to be as confidence as I can, trusting what I have been working on.

“In the huddle, I stuttered through the play call, even worse the second time through it. The guys were asking me the snap call. One of them said “on set”, and that was it. On my first play, I took a sack. On the second play, we handed off. We had a few plays in between with some hitches, outs, and a comeback to get the ball out of my hand to get into a rhythm. Then I threw a 43-yard touchdown pass, 35-yards in the air. That was a good way to start my varsity experience.”

That’s a great story. I love it. What was it like for you throwing your first varsity touchdown pass? 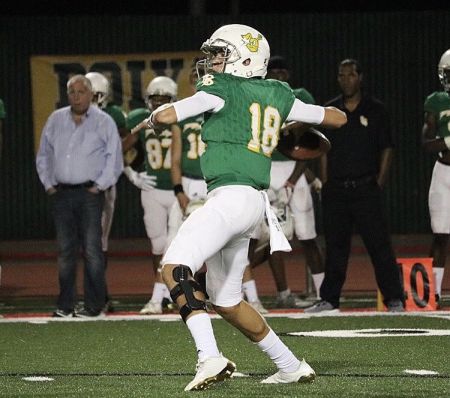 “I was thinking, this is really happening. It is finally happening. What a great feeling. I didn’t hear the crowd really. I ran all the way down there. Everyone was high-fiving me. Matt Corral (Class of 2018) quarterback) was on the sidelines, he was jumping up and down before I threw the ball when he saw the play develop. He put on his helmet, ran down the field, and gave me a huge chest bump. That was cool.”

How has senior quarterback Matt Corral (Florida commit) helped you get adjusted to the Jackrabbits system?

“Matt is like a big brother to me, I’m an only child so I look up to him as a brother. He treats me like a younger brother. He helps us quarterbacks a lot. If he sees something that the coaches do not correct us on, he’ll tell us when we get back on the sidelines. He breaks down coverages for us – anything to look out for us on the field. He helps me a lot in our pro-style offense.”

The team steamrolled Compton 57-10 on Friday, how did the game go for the Jackrabbits?

“It was a great team win. We always have things to improve on throughout the season. Our penalties are going down and our guys are executing everything like we practice. Our defense – we have a really good defense this year. They played really well against Compton.”

Are you also playing freshman and JV ball?

It is really early for you, but are any schools showing recruiting interest in you?

“Yes. We’ve talked to a few schools. My dad knows what it takes to make it at the collegiate level, he played at Nebraska. He drives me around to all the camps helping me get exposure to get to the next level.”

Which teams have reached out or are sending you mail?

“From the USC camp this summer, Purdue and Indiana are showing interest. Texas Tech, San Jose State, TCU, and Northern Arizona are also showing interest. At the USC camp, I spoke with Coach (Clay) Helton (USC’s head coach). He had me with the older kids. That was cool to hang with those guys to see how they carry themselves and perform on the field.”

Jake, thanks for your time today and good luck with the rest of the season.