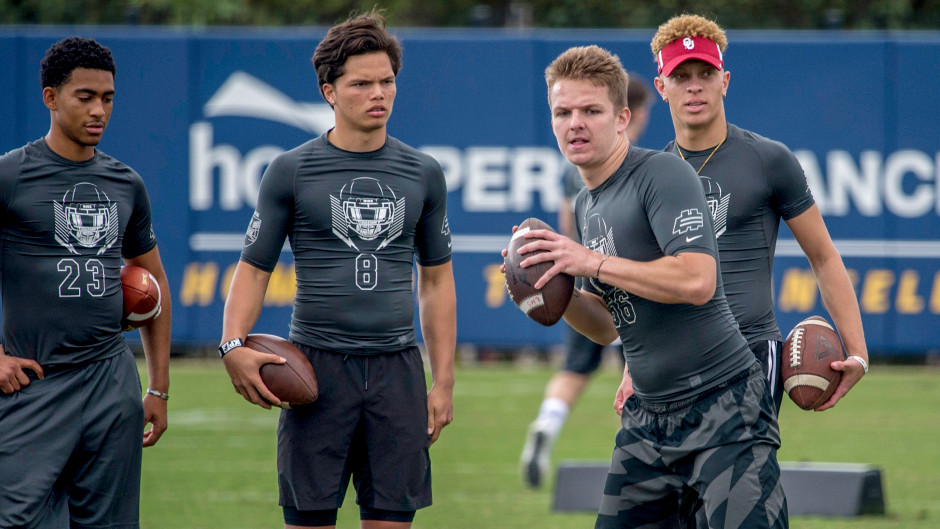 As published on OCREGISTER By Dan Albano

COSTA MESA – Ryan Hilinski fulfilled a dream of his late brother, Tyler. Clark Phillips III pretended he was an NFL player for a day. And Bru McCoy enjoyed a test of athleticism that will keep the debate over his best position alive and well.

The assembly of about 400 top high school football recruits at Nike’s The Opening Regional stirred an array of emotions Sunday through competition and learning from expert coaches.

The Chargers hosted the day-long event at their Hoag Performance Center practice facility. A few of the Chargers’ players served as coaches.

“I definitely saw the atmosphere that the guys get to practice in every day and I definitely felt like I was an NFL player,” said Phillips, a sophomore cornerback at La Habra who grabbed three interceptions Sunday.

Hilinski (6-4, 222), Orange Lutheran’s junior quarterback, won the camp’s top awards. He earned MVP honors for the quarterbacks and later an invitation to the prestigious Elite 11 camp in early June.

“Tyler dreamed of this — coming to the Elite 11 — and now I finished it for him, so it’s pretty cool,” Hilinski said of his brother and former Washington State quarterback who committed suicide in January.

“Coming out here to all these camps, I’m starting to get more comfortable with myself. The ball is just coming out super nice (and I’m) just having great days. I felt really confident. I love all these guys out here.”

Hilinski’s confidence was easily spotted during the afternoon session. While throwing to receivers during one-on-one matchups against defensive backs, Hilinski calmly communicated with his wide outs prior to the snap. He then displayed a strong and accurate arm.

His combination of command and throwing ability were enough to top a field that included St. John Bosco’s DJ Uiagalelei, Mater Dei’s Bryce Young and fellow senior-to-be passers Hank Bachmeier of Murrieta Valley and Spencer Rattler of Pinnacle of Arizona.

“There was a good quarterback group,” said Hilinski, who holds 18 scholarship offers. “It’s fun to get this (recognition).”

Mater Dei’s McCoy (6-3, 215), a junior, stood out as a wide receiver in the afternoon session. McCoy, who also plays linebacker, posted the highest grade in the athletic testing Sunday, recording a 4.62 in the 40-yard dash and a nearly 38-inch vertical jump.

“Probably the most fun was the agility,” said McCoy, whose 40 time finished just off Sunday’s top clocking of 4.57.

McCoy later earned an invite to The Opening finals, an elite recruiting camp in the summer that will be held the Dallas Cowboys’ world headquarters. The events shifts to Dallas after years in Oregon.

Camp director Brian Stumpf called the camp’s wide receivers and defensive backs the best he has seen in the nation so far. Orange Lutheran’s duo of Kyle Ford and Logan Loya and JSerra’s Tarik Luckett also were among the standout wideouts.

Arcadia’s Jabari Kindle of Arcadia earned MVP honors for the wide receivers but Ford later earned an invitation to The Opening finals.

Ford made two spectacular, leaping catches on deep balls. St. John Bosco’s Chris Steele was the defensive back MVP and also earned his ticket to The Opening finals.