Patriots quarterback finally gets a chance 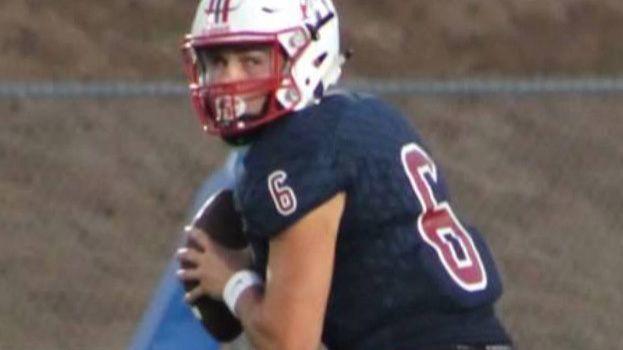 As published in the San Diego Tribune written by: Don Norcross

More than once, more than twice, probably too many times to count, quarterback Owen Easley considered transferring from Christian High. “Many times,” said Easley.

The problem was that Easley was stuck behind 6-foot-5 Brad Jeremiah, who flung a combined 64 touchdown passes the past two seasons. The lowest point for Easley came last season when as a junior, when he was seeing spot duty at multiple positions on the varsity, he was asked to quarterback the JV team.

But Easley stuck around and now he’s reaping the benefits. The Patriots are 4-0, averaging 35 points a game and Easley is a big reason Christian is lighting up scoreboards.

At 6 feet, 200 pounds, Easley is a dual-threat quarterback. Blessed with a strong and accurate right arm, he has completed 60-of-95 passes for 793 yards and six touchdowns.

“His best attribute is his arm, for sure,” said Christian coach Matt Oliver. “He throws a very nice ball.”

Easley, though, isn’t shy about tucking the ball in the crook of his elbow and taking off. He has rushed for 95 yards and seven TDs. His running style is more bulldozer than ballet.

“Some quarterbacks (when running), they’re trying to find the sideline or a patch of grass to fall down,” said Santana coach Tim Estes, whose team’s only loss was a 48-7 setback to Christian. “He looks more like he wants to run over somebody. He’s really an athletic guy.”

While the Patriots value Easley’s athletic skills, what they appreciate more is the patience he exhibited. Maybe more than any other position, high school quarterbacks transfer frequently, looking for the program where they can step in and play.

In fact, the reason Easley played JV games last season was because two quarterbacks the Patriots were counting on left the program.

“I honestly didn’t think he was going to stay,” said Christian tight end/outside linebacker Bryce Riepl, a senior who has started since he was a sophomore. “If it were me, I wouldn’t have stayed for three seasons like that. But I’m beyond thankful he did.”

Waiting his turn to play wasn’t easy for Easley.

“Why am I here?” he often asked himself.

Sitting inside Christian’s coaches’ office, Easley leaned back in a swivel chair, placed his hands on the back of his head, looked to the ceiling and said, “It took a lot of patience, obviously. It took a lot of prayer, too. I felt God put me in this position for a reason, to kind of test me. Are you going to stick to my plan for you? If you stick it out and wait, you’ll get the biggest blessing.”

Easley, who attempted all of three passes last season as Jeremiah’s backup, is not surprised by his success.

Exemplifying a quarterback’s confidence but not coming across as arrogant, he said matter-of-factly, “This is what I expected of myself.”

Because of all that time Easley spent waiting, there may not be a player in the region who more appreciates snapping on a helmet and jogging onto a field beneath the Friday night lights.

To honor his favorite passer, Easley switched numbers this year, from 15 to Mayfield’s 6.

“I wanted to be a whole new person this year,” said Easley. “I try to come out with some fire. For three years I was this nice, quiet kid. Oh, yeah, I’ll do anything. This year, I put my foot down. I’m not taking anyone’s (nonsense) anymore. We’re winning games.”

Easley longs to play college football. Because he didn’t have the opportunity to play extensively until this year he accepts an FBS offer won’t be coming, but he’d love to play at an FCS or Division II school.

In the meantime, he’s relishing the opportunity to finally show his skills. Darting from the coach’s office to put on his shoulder pads for practice, Easley leaves a visitor with one final thought.

“I have a big chip on my shoulder,” he said.

Norcross is a freelance writer.