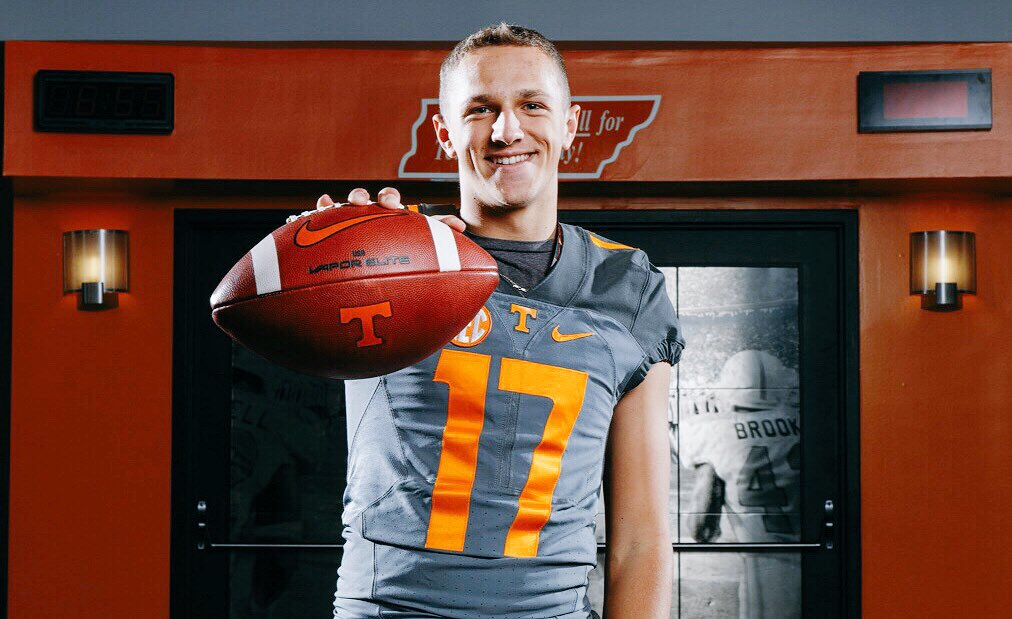 As published on GridIronNow by John Brice

Danny Hernandez had seen some videos, been impressed by the throws.

Perhaps what most helped the Los Angeles-based quarterbacks guru note the serious nature of JT Shrout’s quest to improve wasn’t necessarily Shrout’s ability to fight off a defender, but rather his insistence on fighting through traffic.
L.A. is known for both its sprawl and its traffic; Shrout, once he committed to work with Hernandez, showed he did not care about either deterrent.

“He said, ‘just let me know where you’re gonna be,’” Hernandez, who’s trained L.A.-area athletes for college football the past 15 years and operated Team Dime Los Angeles the last few, told GridIron Now. “A lot of times it’s at Pico Rivera, and that’s a good 1.5 hours away from JT. Sometimes it’s at Cathedral, which is right by Dodger Stadium.

“The very last game of his junior year, I was coaching for Cathedral, there’s a picture of us together right after that game, he said, ‘It’s my show now.’ That day was kind of a day where he said we’re going to really attack this off-season and are coming for it all. He didn’t care where it was – downtown L.A., Pico Rivera, Jackie Robinson Park in Pasadena, Warren High School, it didn’t matter.”

Even before he had worked with Shrout, Hernandez had gained an appreciation for Shrout’s perseverance.

“The thing I immediately noticed is, man, this kid has a ton of skill,” said Hernandez, who is working with multiple quarterbacks and athletes at all levels of college football for the 2018 season. “He didn’t have ton of playing time his junior year, and in my eyes, watching as an outsider looking in, felt he was the better guy and could be the next big-time guy.

“He was at a school (Hart) that traditionally kind of only goes with a one-year starter. Hart had a run in Kyle Boller, Matt Moore, literally had their quarterback only play his senior year and then ball out and go D-1 and beyond like Boller. JT kind of knowing that decided to still be patient, to stick it out. Here on the West Coast, kids are looking to make moves if they’re not starting as freshmen, but he had good roots to his high school and things worked out.”

“Dealing with all the colleges I normally do, they wanted to see more, the movement, the backside dig, check-downs, progressions, and so what I had to do on my end was just recreate that, having workout sessions and making sure filming those things and letting coaches know, this guy is very good,” Hernandez said. “I’ll put him against anybody in the country. He wasn’t Elite 11, but I’d put him against everybody. He’s got the prettiest stroke, he’s got touch, can layer it, everything. I’d put him against everybody.”

Helton, like Justin Wilcox’s California staff as it had garnered Shrout’s commitment, saw plenty to like about Shrout. Enough that the Vols flipped the 6-foot-3, 190-pounder and made him their lone signal-caller in the 2018 class.

Shrout began summer workouts with his new teammates on Rocky Top after he arrived at UT in late May.

“Coach Helton said he throws a really good ball, and I said, ‘I know, he does,’” Hernandez recalled. “And I told him, his best football is ahead of him. JT wasn’t that guy, some guys have been the best quarterback in the whole city since 8-years-old, highly touted, ton of offers. He’s just not that guy.

“I’m looking at how good he is, kid’s ceiling is very high, his best football is ahead. There are some really good guys in his class alone, and I don’t know how much better they’re going to get, but I look at J.T., the kid is still kind of raw, not a ton of experience, not been in front of all the cameras already, but when he’s put in those situations, he already seems a natural.

“His ceiling is just so high, he’s just scratched the surface of how good he can be, and under an amazing coach like Coach Helton and the rest of that staff, he’s going to be a sponge. The game’s going to really slow down for him.”

The game’s experts with top-level experience who run the QB Collective in Thousand Oaks, CA saw first-hand last summer a slice of Shrout’s burgeoning potential. At a camp with coaches like Mike Shanahan and Jim Zorn, alongside competitors who would sign 13 Power-5 scholarships and two more into the Ivy League, Shrout’s performance stood tall.

“Another big part in helping him was the opportunity to go to the QB Collective Camp,” Hernandez said. “It was basically an all-NFL staff. They were quoted as saying he was the most NFL-ready player throwing the ball. There were a lot of top dogs at that camp, and they gave JT pretty much the MVP at that camp, one where he got that stamp of approval.”

Now, more college coaches have found Hernandez’s stable of arms. Four-star Ryan Hilinski is a 2019 quarterback committed to South Carolina, and Hernandez has lined up a trip in a few days to the University of Georgia, which is now recruiting other of his players.

“There could possibly be three SEC programs with our kids in them,” Hernandez said. “That’s humbling; I feel blessed. It’s never about me, all about the kids. I’m lucky they trust me to help them in this process.

Now, more college coaches have found Hernandez’s stable of arms. Four-star Ryan Hilinski is a 2019 quarterback committed to South Carolina, and Hernandez has lined up a trip in a few days to the University of Georgia, which is now recruiting other of his players.

“There could possibly be three SEC programs with our kids in them,” Hernandez said. “That’s humbling; I feel blessed. It’s never about me, all about the kids. I’m lucky they trust me to help them in this process.

“But without a doubt, that would be insane and I would love for that to happen [a future Shrout-Hilinski matchup on an SEC field]. The thought just gives me chills. It would be pretty awesome. I have video of both of them working out together last year, doing a mirror-drill thing. Funny to think those guys could really be playing against each other in college.”