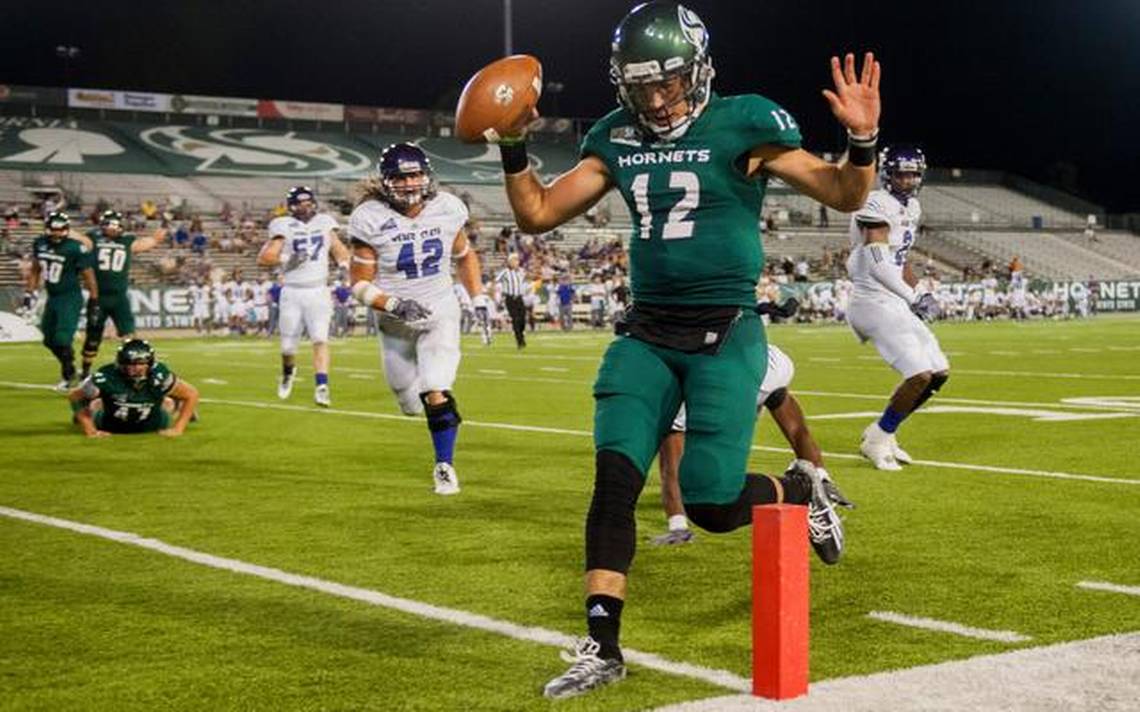 As published on the SacramentoBee By Bill Paterson

The former walk-on also is seventh in career rushing yards (1,862) and tied for sixth in rushing touchdowns (16), and he leads the Football Championship Subdivision in total offense, averaging 355.4 yards a game.

But if Safron is unable to lead the Hornets over UC Davis for the first time in his fourth Causeway Classic start, does he really deserve exalted status?

“I’m not sure what others will think, but I’ll have a bitter taste in my mouth if I don’t go out with a win,” Safron said. “I know all my teammates, especially the senior class, would love to go out with a win.”

UC Davis coach Ron Gould and other Big Sky Conference coaches think Safron has established his greatness, regardless of how Saturday’s game plays out.

“When you start talking about great quarterbacks in this conference, the first guys you talk about are Garrett and Vernon Adams Jr. (Eastern Washington’s 2013 Big Sky Offensive Player of the Year),” Gould said. “(Safron has) earned that. He’s one of the best in the country, in my mind.

“He’s a winner. To come on as a walk-on, earn a scholarship, earn a starting spot and have the impact he has had is a tribute to his character.”

Safron threw for a Sac State single-game record 554 yards and accounted for six touchdowns in a 43-42 come-from-behind win in Portland last season. He did it again Saturday in rallying Sac State past the Vikings with 290 passing yards and three touchdowns in a 48-41 win at Hornet Stadium.

“He’s this generation of quarterback,” Burton said. “If we can manage to slow the run game down and cover all the receivers, he can take off and run on you. And he’s faster than most of your defensive backs. So it’s not really fair.”

Idaho State’s Mike Kramer, coaching in the Big Sky Conference since 1983, also is a fan.

“When he’s on, he’s a tiger,” Kramer said. “He’s as good a quarterback as we have faced all season, and that includes Travis Wilson at Utah and Chuckie (Keeton) at Utah State.

“We think the world of him and hope he goes on to an outstanding opportunity at the next level.”

Sac State coach Jody Sears tried without much success to stop Safron in his previous two seasons while leading Weber State. In his first year with the Hornets, Sears appreciates his quiet star’s work ethic and leadership.

“When you have a guy that good pulling your trigger, he’s got to have some intangibles that you can’t coach,” Sears said. “And Garrett’s got them. He knows coverage. He knows rotations. He knows pre-snap reads. He has a good feel where he is supposed to go with the ball.”

Safron said a number of teammates and coaches helped him evolve from a raw, emotional and unproven prospect to a potential next-level player, none more than offensive coordinator Paul Peterson, the former Boston College quarterback.

“Coach P has been a great mentor, so I’m definitely going to miss him,” Safron said. “I’m able to understand the game a lot better because of him.

“He works his butt off. He’s always watching film, setting up the best game plan and putting me in the best situations. And he’s surrounded me with great playmakers.”

They include wide receivers Nnamdi Agude and DeAndre Carter, a close friend of Safron’s and a Walter Payton Award nominee as the top player in the FCS. Carter leads the FCS in receiving yards (1,200) and receiving touchdowns (16), and Agude has 1,089 receiving yards and nine touchdowns. It’s the first time Sac State has had two 1,000-yard receivers in the same season.

“He’s got the most heart of anybody I’ve played with,” said Carter, who also holds several Sac State receiving records and can attain a few more Saturday. “He’s going to make plays regardless of the situation.”

But while that’s all good, the question remains: Will those gaudy stats matter against UC Davis?

Safron knows this. The losses to the Aggies have left scars.

“When we go out with a loss vs. Davis, it’s kind of bitter,” Safron said. “We’ve tried to put those losses in perspective. On Saturday, we just want to go out with a bang.”