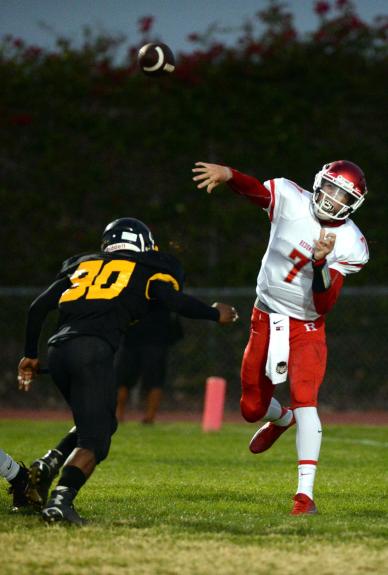 Redondo Beach >> Jack Alexander is the perfect combination for the Redondo football team.

The senior quarterback has the size (6-foot-3), the smarts (4.0 GPA), high completion percentage (71 percent) and colleges are starting to pay even more attention.

“I’m enjoying it a lot more this year,” Alexander said. “It is my senior year. I’m trying to play a little bit more loose. Last year, I had a little bit of stress issues just on myself. This year, I’ve tried to take a step back and just enjoy it all.”

Through three games this season, Alexander has completed 57 of 80 passes for 660 yards with eight touchdowns and only one interception. He also leads Redondo in rushing (304 yards) and has five touchdowns. And he’s only getting started.

“No complaints over his play, that’s for sure,” Redondo coach Matt Ballard said. “He’s finding his rhythm and trying to balance and juggle running an offense, with all the reads and responsibilities and the pressures of the game. He knows the offensive package better than I do.”

“He has a high football IQ,” Redondo’s first-year offensive coordinator John Aponte said. “The guy understands football. I’m coming in with a brand new offense, which is predicated off of the quarterback making a lot of in-play decisions and that’s very hard to do at the high school level when kids don’t understand basic football concepts.

“He’s probably one of the smartest quarterbacks that I’ve had. He understands exactly what I’m looking at, so when a quarterback and OC can be on the same page and are able to call some plays — he’s an extension of you, it makes everything so much easier.”

Alexander has had an interesting ride. He began high school at Redondo and then transferred to St. John Bosco before returning last year.

“I was at St. John Bosco my sophomore season and being there, with their playbook and the amount of talent we faced, really helped me understand the game and got a little bit more confident that I could stick with the big dogs,” Alexander said.

“The commute (to St. John Bosco in Bellflower) was getting to be a little bit too much,” Alexander said. “It kind of hurt me leaving my boys here … I knew they needed a quarterback to step up their junior year. I just missed it to be honest and I knew I could bring a high-level football IQ here and I wanted to do that.”

Redondo earned a share of the Bay League title and advanced to the quarterfinals of the CIF-SS Division 4 playoffs.

This year, Alexander began the season passing for 157 yards and two touchdowns and rushing for 121 and two more touchdowns in the season-opening loss to Rancho Verde.

He’s averaging four touchdowns a game, thanks in part to his six-touchdown (four passing, two rushing) in last week’s 49-12 victory over Westchester.

“Last year, they ran a huddle, multiple pro-style spread offense,” Aponte said. “It was slow-paced. This year, we don’t huddle. We do pick up the pace on offense, we run a lot more RPO (run-pass option) and we try to take advantage of what the defensive look is giving us.

“If you have a high-IQ quarterback that can see things pre-snap and then post-snap and figure it out quickly, you can have good success. This year, we try our best to always be in a good play and then get the ball into the hands of our playmakers.”

The quarterback position has been part of Alexander since the eighth grade.

“I like having the ball in my hands,” he said. “I had the best arm on the team and they put me back there, but I’ve kind of progressed into a leader as the years have gone on.”

With his fast start, Alexander, who holds an offer from Cornell, said interest from colleges has picked up. He feels that he will eventually make a decision close to signing day.

He said he’s looking for a school with a good academic reputation. Academics have always been a part of his life and that has helped him develop on the football field.

“My family has always been a big academic family,” he said. “Part of that mental focus in the classroom comes out here on field. I take every rep like a test, take it serious and I think that helps me in long run.”