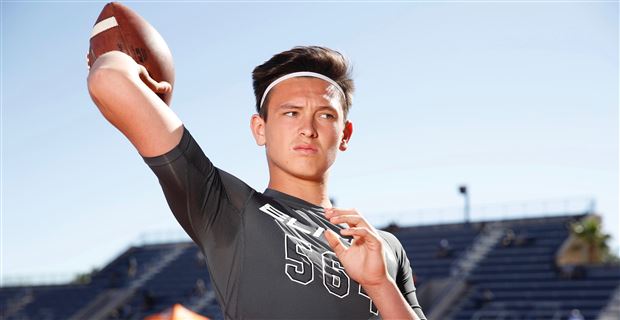 As published on 247sports.com by Greg Biggins

Eget is a talented quarterback with a lot of plus tools working for him. We had a chance to see him over the weekend at the Huntington Beach 7v7 passing tournament and he was impressive in multiple games.

At 6-3, 195 pounds, Eget has a prototype quarterback frame, a smooth easy delivery and the arm strength to make every throw he needs to. He was very accurate when we saw him, throwing early and anticipating well and fitting the ball in some pretty tight windows.

He had a handful of drops but never got down on his receivers and we liked how he led his team. He looked very comfortable rolling out and making throws outside the pocket and from a talent perspective, Eget has the ability to play at the BCS level without a doubt.

Surprisingly, Eget’s recruitment has yet to really take off and he said he’s mainly only hearing from a two programs right now.

“The main two I’m talking with right now are Georgia and Oregon State,” Eget said. “Georgia came and saw me at a practice and I talked to coach (James) Coley a little afterwards. He invited me to come out to their camp but unfortunately I wasn’t able to make it out there. They’re watching me though and want to see some senior tape.

“I camped at Oregon State and really liked it there. I loved the campus and the coaching staff and I like Jonathan Smith a lot. I thought they might be close to offering but they want to see some senior tape too. It’s always been a dream of mine to play in the Pac-12 so an offer from Oregon State would definitely be big for me.”

Last year, we saw a number of quarterbacks see their recruitments pick way up following the Early Signing Period in December and could definitely see that happening for Eget if he plays things out that far.

“I’m just trying to be patient right now and focusing on having a good senior year,” Eget said. “As a quarterback, it can be tough at times because most schools only want to take one and a lot of the spots are already locked up right now.

“So for me, I just want to work on having a great year and helping my team win games. Hopefully everything will work out for me in the end, that’s the recruiting game, you just have to take care of what you can and hope for the best.”

Sacramento State and San Jose State are a couple of programs who offered Eget early on in the process but both picked up commitments from quarterbacks. Eget should be a late steal for someone and we could see his recruitment really picking up when his early senior tape gets out.