Posted on May 24, 2018 in High School Quarterbacks, Weston Eget. 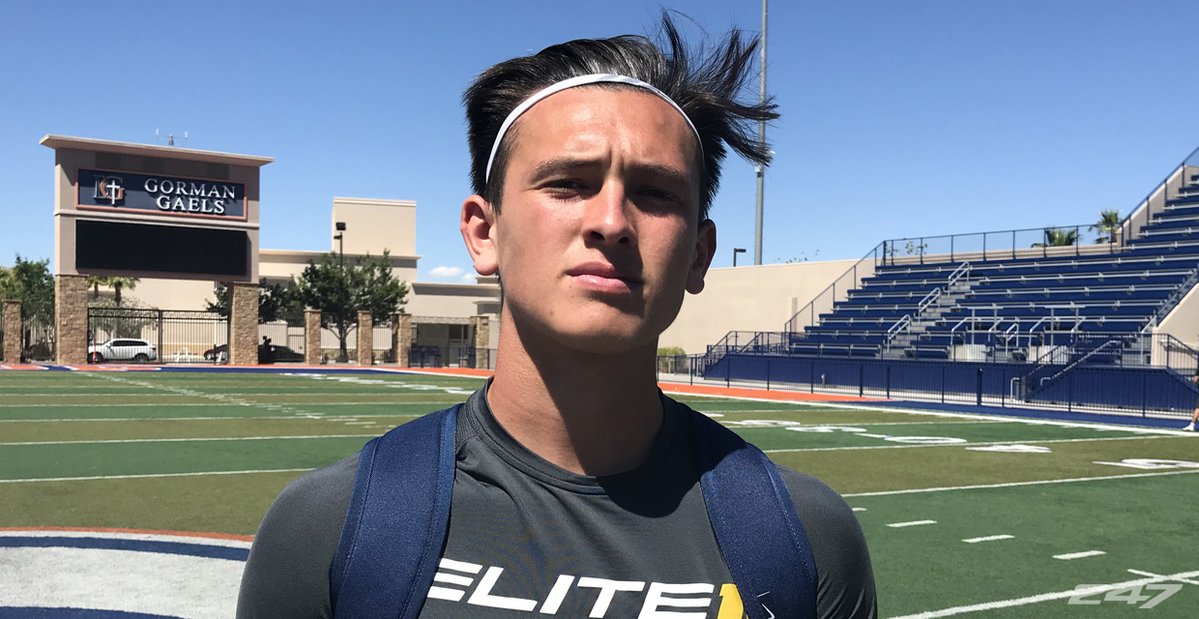 As published on 247Sports by Greg Biggins

Stevenson Ranch (Calif.) West Ranch quarterback Weston Eget is one of the top remaining signal callers on the board out West.

Weston Eget has had a solid off-season and has shown he’s a player that should be watched very closely this spring and summer.

Eget is a bit of a late bloomer who took over the starting job as a junior a few games in to the season when the starting quarterback went down with an injury. He shows up well on film and has the size, arm strength and mobility to play and excel at the next level.

He has looked even better this off-season then his tape shows and is throwing with a ton of confidence. His mechanics look better, he’s comfortable rolling out to his left or his right and throwing with zip and accuracy and shows very nice touch on his deep balls.

We saw Eget at the Las Vegas Elite 11 Camp two weeks ago and like what he showed. He got better and improved as the day went along and was one of the top quarterbacks in the event.

On the recruiting front, Eget has an offer from San Jose State and is hearing from a handful of other programs as well.

“The offer from San Jose State felt great, it’s always good to get that first offer under your belt,” Eget said. “Coach Gunderson offered me and I’m going to visit out there on June 24 for their summer camp.

“I’m also hearing from Arizona State, Georgia, Hawaii and a little from UCLA. Of that group, ASU and Georgia sound like the two that could be closest to offering. Coach Likens at ASU came to my school and watched me workout and I’m planning to visit out there sometime in June. I definitely have a lot of interest in their program.

“Coach Cooley from Georgia also came out to watch me workout and has been talking to me. They seem very interested as well and that’s a great program and I’m planning to visit there as well so we’ll see what happens.”

Along with the San Jose State Camp, Eget has a few other camps he’s planning to get to this summer.

“I’m going to the USC Rising Stars camp on June 10,” Eget said. “I’m not hearing from USC right now but that’s always a good camp to go to because there are so many other colleges there watching and evaluating.

“UCLA came to my school and has hit me up twitter a few times so I’m trying to maintain interest with them as well. Right now, I don’t have a leader, I’m still open to everyone. I feel like I got kind of a late start with my recruitment so I’m going to let it play out.

“I haven’t taken a lot of visits or seen any of these schools up close so I’m going to take my time and make sure I’m doing the right thing before I commit anywhere. If I have to take my recruitment in to the season, I have no problem doing that.”